In this Memorial Day episode of the StoryCorps podcast, we remember some of the men and women who served in the United States Armed Forces and died in combat. 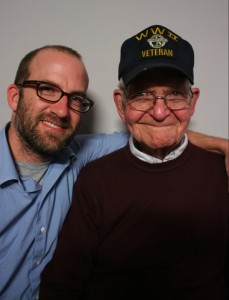 First we hear from Harrison Wright, a World War II Army veteran. Drafted in March 1943, he was shipped off to Europe spending time in England, France, Germany, and Belgium. Having played the trumpet in high school, Harrison became his battalion’s bugle player with the responsibility of blowing “Taps” over the graves of fallen soldiers.

Just days after the war ended in 1945, Harrison was called on to honor all of his fallen comrades. He came to StoryCorps with his grandson, Sean Guess (pictured together at left), to talk about that day on a hilltop in Belgium.

Our next story is from Air Force Technical Sergeant 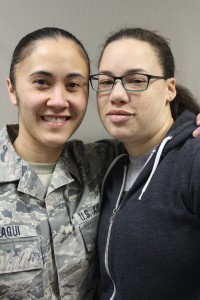 MaCherie Dunbar. A reservist, she was deployed to Iraq in 2007 and then again in 2008. While overseas, she volunteered for “Patriot Detail”—a ceremony for soldiers, airmen, Marines or sailors killed in action in which their flag-draped coffin is escorted to the plane that will take them home.

MaCherie came to StoryCorps with her girlfriend, Barb Maglaqui (pictured together at left), to talk about the emotional ceremonies she took part in.

Barry Romo grew up in a tight-knit family in Southern California in the 1950s. The youngest of his siblings, he spent his childhood surrounded by a niece and nephews of a similar age. He was particularly close with one of his nephews, Robert, known to everyone as Bobby.

During the Vietnam War, 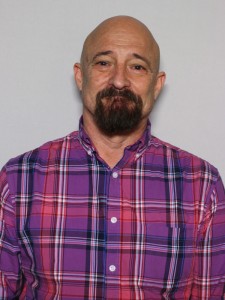 Barry enlisted in the Army and Bobby was drafted. Only one of them came home.

Private First Class Robert Romo was killed in action in 1968 and First Lieutenant Barry Romo (pictured at left) was asked to escort his body home. Barry, an active member of the group Vietnam Veterans Against the War, came to StoryCorps to remember his nephew.

Our final story is from Robert Stokely, whose son, Sgt. Michael Stokely (pictured together in the player above) served in the Georgia Army National Guard and was killed in Iraq in 2005 by an improvised explosive device.

Robert, feeling guilt over the loss of his son, decided in 2011 to travel to Iraq to see the land where his son had died. He came to StoryCorps to discuss the he long, emotional, and dangerous journey that allowed him walk on the ground where Mike last walked, and which also brought him some peace and comfort.

Christopher Bowen – “I Want to See You Fly”