In this podcast, we look back on the early days of the AIDS epidemic, when little was known about the disease including just how far-reaching and destructive it would become. 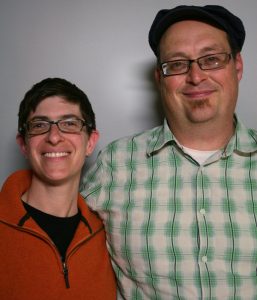 In our first story, we hear from Stefan Lynch Strassfeld. Growing up in San Francisco in the late 70s and early 80s, Stefan was raised by his gay father, Michael Lynch, and his stepfather, Bill Lewis (top photo second from right). Surrounded by a large network of his fathers’ friends, Stefan referred to his extended family as “his aunties.” Beginning in 1982, Stefan watched a number of those he was closest to die from AIDS. He came to StoryCorps with his friend, Beth Teper (below), to remember how the disease devastated his world.

Stefan later became the first director of COLAGE, a national organization that connects people who have lesbian, gay, bisexual, transgender or queer parents. 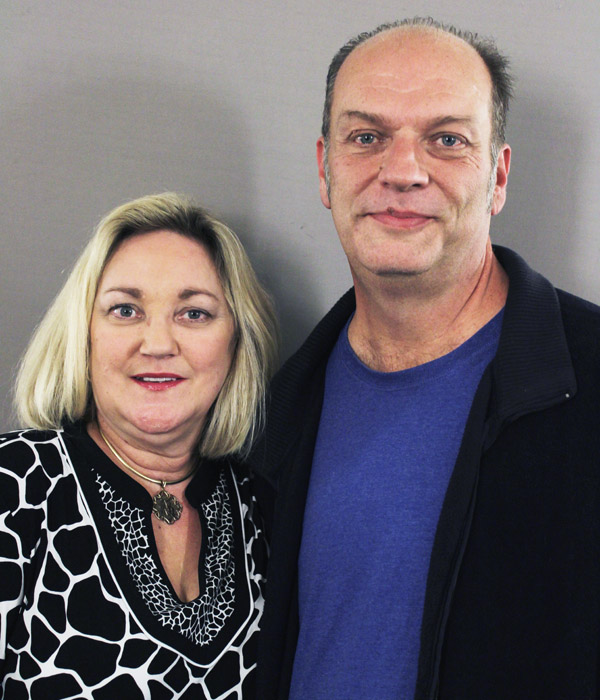 Our second story brings us to the South. Ruth Coker Burks was a young mother in her early 20s when the AIDS epidemic hit her home state of Arkansas. Despite having no medical training, Ruth took it upon herself to care for those suffering from the disease when their families, and even trained medical professionals, abandoned them.

Ruth estimates that she cared for nearly a thousand people since the early 1980s, with one of those being Paul Wineland’s partner. Ruth and Paul (above) sat down for StoryCorps to talk about her experience visiting a friend at a Little Rock hospital where one of the state’s early AIDS patients lay dying. 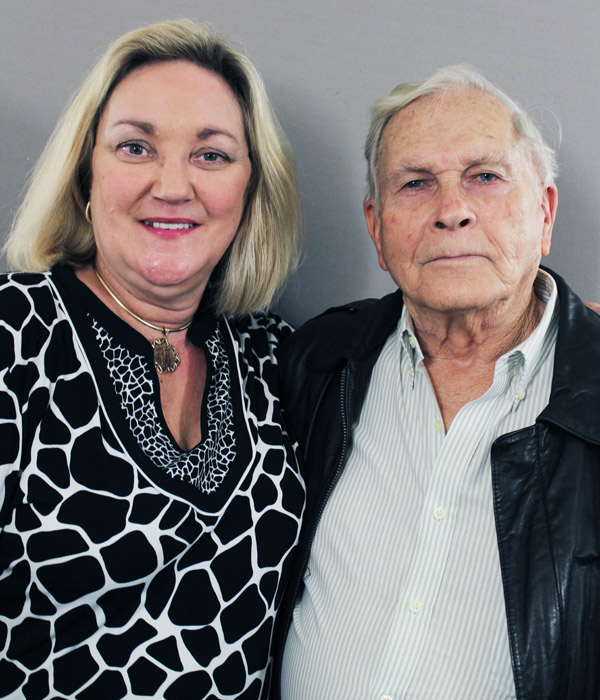 Not all the people Ruth helped care for were abandoned. Over the years, she met many people who stayed with their loved ones. In our next story, Jim Harwood (above), whose son died of AIDS, reconnects at StoryCorps with Ruth more than a decade after they last spoke.

In our final story, we hear from Reverend Eric Williams. In 1991 in Kansas City, Missouri, he was a young pastor who had just taken charge of his own church when he received a phone call from a funeral home asking him to bury a gay man who had died from AIDS. His first reaction was to refuse. But as he told his colleague Jannette Berkley-Patton (below) at StoryCorps, “everything good that I have been able to accomplish has started with some kind of a burden. And AIDS burdened me. So reluctantly, I did the funeral.” 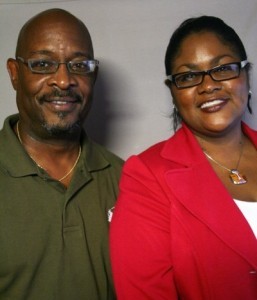 According to Rev. Williams, the experience of meeting the boy’s family changed him and since that time he has devoted himself to ministering to people with AIDS and their families, as well as educating others about the disease.

Michael Garofalo (MG): This is the StoryCorps Podcast. I’m Michael Garofalo. Today, we’re looking back on the early days of the AIDS epidemic, when not much was known about the disease or just how widespread and destructive it would become.

Stefan Lynch Strassfeld (SS): My family were mostly gay guys, who were my babysitters and the guys who you know, took the pictures at my birthday parties, and I called them my aunties

MG: That’s Stefan Lynch Strassfeld. He grew up in San Francisco during the late 1970s and early 80s. He was raised by gay parents and a large network of his parents’ friends, and these guys, who were really Stefan’s extended family, were hit very hard by the disease.

Beth Teper (BT): And how old were you at the time?

SS: I was ten when he was diagnosed. I remember, I was on the beach and I saw him and he was covered in these purple spots and I remember asking my dad, like what’s wrong with Steve? And my dad said, “Oh he has this skin cancer called Kaposi’s sarcoma.” And I said, well what is that? And my dad said, “Well nobody really knows, but there are some gay men that are getting it.”

And within I think 2 months, Steve was dead. And it was pretty much a succession of deaths of my family throughout the next decade. My step dad Bill died in ’87, my dad died in ’91, after a really grueling six months of me taking care of him. You know, I was 19 and at that point, everyone had died except for a handful of stragglers who I now hold near and dear to my heart. My aunties. It was a powerful family. There was a lot of love. And they modeled for me how to survive an epidemic, even if you were dying while doing it.

MG: That’s Stefan Lynch Strassfeld speaking with his friend, Beth Teper, in San Francisco. For the next story we’re headed to the south: Arkansas, actually. Ruth Coker Burks was a young mother in her early 20s when the epidemic hit her home state, and she took it upon herself to care for AIDS patients when their families and even medical professionals wouldn’t. Ruth herself has no medical training but she estimates that she’s cared for nearly 1,000 people since the early 1980s. One of those people was Paul Wineland’s partner, and in their StoryCorps interview Ruth and Paul talk about how she got started. Ruth had been visiting a friend at a Little Rock Hospital, where the state’s first AIDS patient was dying.

Ruth Coker Burks (RCB): The nurses were drawing straws to see who would go in and check on him. And so I snuck into his room. And he wanted his mama. And so I marched myself out to the nurses’ station and I said “Can we call his mother?” and they go “Honey, his mama’s not coming. He’s been here six weeks. Nobody’s coming.”

And so I went back in and he looked up at me and he said “Oh mama, I knew you’d come.” I stayed with him for 13 hours while he took his last breath. I called his mother and I told her that he had died and she said “I’m not burying him.”

So I had him cremated and I brought him home.

Paul Wineland (PW): And you buried them. When they died when no one else would.

RCB: Yeah. I’ve buried over 40 people in my family’s cemetery because their families didn’t want them.

RCB: It really does. It was such a horrible time. But we’re still standing.

[MUSIC “Genius and Thieves” by Eluvium]

MG: That’s Ruth Coker Burks and Paul Wineland. If you’re wondering what it was exactly that Ruth did to care for these people—it was a little bit of everything. She’d advocate at hospitals and at funeral homes. She even stock-piled medication in a pantry at her house so that when it wasn’t available at local pharmacies, people could get the drugs they needed from her. Ruth lost touch with many of the partners and friends of the people she cared for. In fact, it had been more than a decade since Ruth spoke with a guy named Jim Harwood. Jim’s son, Raymon, died of AIDS, and Ruth cared for him. They reconnected for this conversation.

RCB: How did you feel when you found out he had AIDS?

Jim Harwood (JH): Well, I was flabbergasted. It’s something that, you know, only happens to somebody else, not to you.

JH: And then, uh, I think he knew that he was not going to get any better, and uh, he wanted to come home, be with his family. So he quit his job and came home.

RCB: I’ve worked with over a thousand people, and you’re one of only three who did not abandon their children when they were dying.

JH: I find that absolutely amazing, surprising and, and a terrible fact. I can’t imagine anyone deserting a child for any reason.

RCB: I’ve had pharmacists absolutely refuse to order medication. And when I would take people with AIDS into the pharmacy to sign, they would go, ”You can keep the pen.” And I ended up with an entire coffee can of ink pens because they would say, ”We don’t want it.”

JH: It was like, you know, leprosy or the Bubonic plague…

JH: …at that time. Just sort of like the kiss of death. You hope, that’s all you can do.

RCB: Right. Y’all have just been so dear to me and I’ve thought about you through the years. Of all the people, y’all always came to mind. You were so brave, and you had so much love. I would’ve loved to have been your child.

MG: That’s Ruth Coker Burks with Jim Harwood. Both of these interviews were recorded in Hot Springs, Arkansas. Ruth is one of those rare people who doesn’t run away from suffering. In fact, she runs toward it without hesitation. But for Reverend Eric Williams, it wasn’t so clear what he should do when AIDS hit his community. It was back in 1991 in Kansas City, Missouri; Williams was a young pastor who had just taken charge of his own church.

Eric Williams (EW): So I get a call from a local funeral home. She said, ”I’ve got a really big favor that I want to ask. There is a kid that died. He’d been a member of the church all his life. His parents were very active in church. Mom sang in the choir. At any rate, he’s twenty-five years old and he died of AIDS–and he just happened to be gay. She said, when his pastor found out how he died, he said, ”Well you know, I am not going to do the funeral and it can’t happen in our church.”

Jannette Berkley-Patton (JBP): So how did you respond to that then?

EW: I didn’t want to do it…didn’t want to do it. It’s not appropriate for one pastor to go against what another pastor has said, this is what I am going to do in my congregation. And I was perfectly alright with that until I went home and um, started thinking about this family. You know everything good that I have been able to accomplish has started with some kind of a burden. And AIDs burdened me. So reluctantly, I did the funeral. I met the parents of this kid and, you know, I was used to black dads disowning their gay sons. That was the thing to do, My son can’t be gay. But not this family. This father and this mother, they celebrated his life. They embraced all of his friends. And, you know, they taught me more about unconditional love in that little experience than any of the Sunday school books, and any of the courses in seminary, or any of it. And that was the event that kind of rearranged my life.

MG: That’s Reverend Eric Williams speaking with a friend in Kansas City, Missouri. Since 1991, Reverend Williams has devoted himself to ministering to people with AIDS and their families.

That’s all for this episode. These stories were produced by Jasmyn Belcher Morris, Liyna Anwar, and Katie Simon. You can find out what music we used in this episode by going on our website. And a special thank you to everyone who participated in the Great Thanksgiving Listen. So far, 36,000 interviews have been uploaded, and if you’ve recorded but you haven’t uploaded yet, don’t forget to do that because we can’t tell if you did an interview until it’s online.

For the StoryCorps Podcast, I’m Michael Garofalo. Until next time, thanks for listening.

In this episode, how kids and their parents — who have navigated many changes together — are facing the next big change apart.

podcast
Every Seed Your Mother Sowed
4:57

Every Seed Your Mother Sowed

Every Day Is Yesterday: Remembering 9/11

As we mark the 20th anniversary of 9/11 — memories of Richard Palazzolo, who didn't make it out of the Twin Towers that day — told by his identical twin brother who did.

podcast
From StoryCorps and Consider This: The Lasting Toll Of 9/11
16:38

From StoryCorps and Consider This: The Lasting Toll Of 9/11