In July of 1963, a group of African American protesters were arrested during a series of non-violent, anti-segregation demonstrations in Americus, Georgia. More than a dozen girls, some as young as 12, were taken to the county jail before being transferred to an old, abandoned stockade in Leesburg, Georgia, 30 miles away from home.

Their parents had no idea where they were. And although the girls were never formally charged with a crime, they’d stay in Leesburg for nearly two months — in a small, run-down building with concrete floors, barred windows, and a broken toilet. 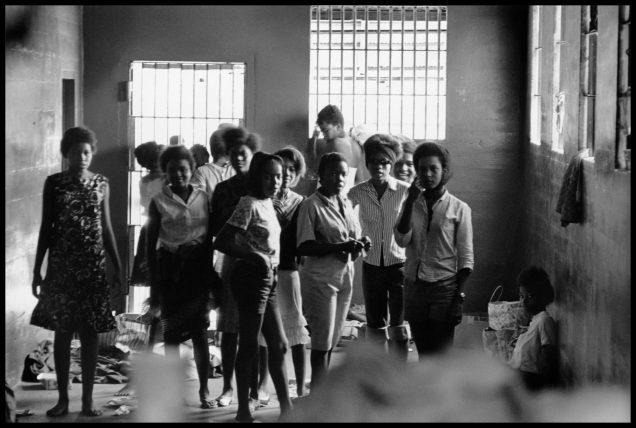 More than fifty years after their release, several of the Leesburg girls, now women in their sixties, came back together to share their experience. In this episode, they shine a light on this overlooked moment in civil rights history. 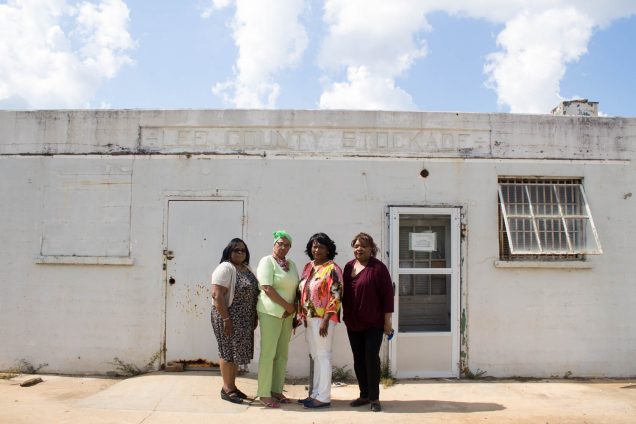 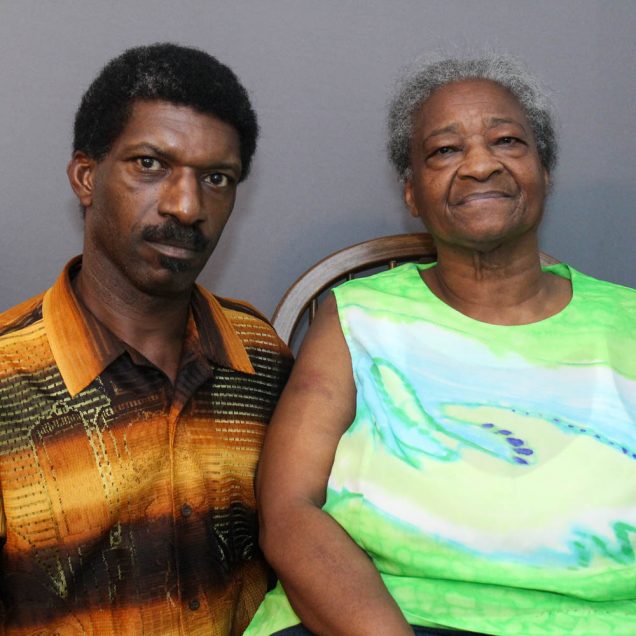 Bottom photo: Joseph Jones III with his mother, Verna Hollis, at their StoryCorps interview in Americus, GA. Verna was unaware that she was pregnant with Joseph while she was held at the stockade. She died in 2017. Photo by Alletta Cooper.

Jasmyn Morris (JM): In 1963, more than a dozen young girls were arrested for protesting segregation in Americus, Georgia. They were taken 30 miles outside the city and held in an old stockade, a rundown cement structure that once functioned as a prison.

Shirley Green-Reese (SGR): There were days we were up all night looking at the door, hoping that somebody would come try to rescue us but nobody came, day after day.

Emmarene Kaigler-Streeter (EKS): I missed my mother more than anything.

Diane Bowens (DB): We just did what we could to try to console each other.

JM: On this season of the StoryCorps podcast, we’re bringing you stories of reunions. And in this week’s episode, how a group of women came back together on their own terms, to shine a light on an overlooked moment in civil rights history.

SGR: We have never talked about the stockade in 52 years. And I still don’t like to talk about it but this is a part of all of our lives.

Over the last 15 years, StoryCorps has given five-hundred-thousand everyday Americans the chance to talk about their lives. Whether they are stories that have never been told before, or stories that history forgot.

We archive these recordings in the Library of Congress for posterity, so that future generations can hear these firsthand accounts.

In this week’s episode, we’ll take a few minutes to bring you the story of an overlooked moment in civil rights history, told by the women who lived it.

In July 1963, more than 200 African American protesters gathered in Americus, Georgia for a series of demonstrations to end segregation.

Police made several arrests that day, including more than a dozen teenage girls who were part of the peaceful protests. They spent the night in a county jail… but the next day… due to what the police called “overcrowding,” they were loaded onto a truck and driven to a small town called Leesburg.

The girls, who were between the ages of 12 and 15, had no idea where they were. But with one guard standing watch, that’s where they’d stay… in Leesburg, locked inside an old stockade… a small, square building with concrete floors, barred windows, and a broken toilet… details which Carol Barner-Seay remembers all too well…

Carol Barner-Seay (CBS): The place was worse than filthy. People wouldn’t put their pets in such condition. It was hot, except for the open, barred windows. All kinds of insects flew in, cockroaches, mosquitoes, everything.

JM: More than 50 years after their release, four of the girls – now women in their sixties – sat down for StoryCorps.

CBS: I thought about my siblings, What are they doing? What is my mom cooking today?

EKS: I missed my mother more than anything; I just missed seeing her face every day.

DB: We slept on the hard concrete floors. No water…

SGR: Our parents didn’t even know where we were and I had never been away from home. But a couple of us was very strong and you was one of those persons.

DB: We just did what we could to try to console each other.

SGR: After a week, it started messing with me mentally, as if no one cared. There were days when we were up all night looking at the door, hoping that somebody would come try to rescue us. But nobody came.

I gave up hope many days.

SGR: I did not speak it but it was a lot of crying in that place.

JM: After spending nearly a month in the stockade, the girls’ parents found out where they were being held. But none of the families could afford bail.

Around the same time, the Student Nonviolent Coordinating Committee or SNCC —  a major civil rights organization in the 1960’s — also caught wind of the situation.

They sent one of their photographers  to Leesburg – the now renowned Danny Lyon – to document what was happening. One of his photos shows a group of girls — some facing the camera, some holding onto the barred windows — looking tired and confused.

Other photographs show their living conditions, conditions they lived with for the two months they spent locked inside the stockade.

Next, how the girls made it out, and put the past behind them, until a reunion brought them back together more than 50 years later…

After Danny Lyon’s photographs were printed in a SNCC newsletter and several black-owned publications, the girls were released from the stockade in September 1963.

Here they are again, remembering what it was like to finally return home.

CBS: My mom, she heated water on the stove, because I hadn’t had a bath in two months, and she was bathing me. My Mama scrubbed and she scrubbed. Finally she stopped scrubbing, dried me off and she put me on some clothes and my mom put me to bed like I was a baby.

EKS: When I came home, I stopped playing with my dolls. And my life became focused on what was going on in the world.

SGR: My classmates and my teachers never asked me where I was coming from. I felt like I didn’t fit in, so after high school, I left the area and moved forward. So what I did? I got a job in the library. And I saw this picture for the first time in my life. I said, “This is us.” And I felt like it was an embarrassing picture to me. I wasn’t going to share that with nobody because I didn’t want them to know I was in that jail.

We never talked about the stockade…

DB: You are right.

JM: But that changed in 2015, when Shirley organized a reunion for the Leesburg girls. As they reflected back, they remembered one of the girls, Verna Hollis, who had a particularly hard time during their imprisonment.

SR: As days went by, we noticed that she was getting weaker and weaker, so we had to focus more on her.

DB: Right… If she ate, it would just come right back up. I was scared Verna was going to die.

CBS: Verna sat in one spot. We never saw her move.

EKS: If she moved, it had to be at night when we were asleep.

CBS: …had to be. But Verna never complained to us. If she complained to anybody, it was under her breath to God, but we never heard it.

JM: What the girls didn’t know at the time, and what Verna didn’t know either… was that she was pregnant when she got to the stockade.

After their release, Verna gave birth to that child, a baby boy. And 50 years later, the two of them sat down for StoryCorps.

Joseph Jones (JJ): When you was taken to the stockade, how did you feel when you first arrived there?

Verna Hollis (VH): I was scared and mad that they could treat a human being like they treated us. We both could have died in there. We both could’ve died.

JJ: I couldn’t believe that living in this town I had never heard this story. I didn’t know you were locked up.

VH: You was like 13 or 14 when we told you about it because I want to put that behind me, really.

JJ: Out of all this, is there anything that you’re proud of?

VH: You came out alright. You’ve always been a good boy. I’ll tell the world that.

JJ: You have been my inspiration as far as how to be strong. I’m proud of that and I try to live from that.

JM: That’s Joseph Jones the third speaking with his mother, Verna Hollis. Verna died in 2017 at the age of 68.

CBS: If you could see the mens who locked you up now, what would you say to them?

DB: I hope God touches their heart, the minds of the people that still feel like we are less and we’re equal.

Decades later, the stockade is still there and it looks the same. There’s no historical marker… no signs of what happened back in 1963. But for these women, it’s something they carry with them… always.

DB: You didn’t know this but today, when I got in this elevator, I was about to have a heart attack. I just don’t want to be closed in and I don’t want to be in the dark. I’m sixty-six years old and I sleep with two lights on in my bedroom.

SGR: For me, it has been in my fibers for years. And I still don’t like to talk about it but

this is a part of all of our lives…

JM: None of the girls who were held at the Leesburg stockade in 1963 were ever formally charged with a crime.

That’s it for this week’s episode. It was produced by Jud Esty-Kendall and me. Our engineer is Michael Raphael, script editors are Danielle Roth and Sylvie Lubow. Our fact-checker is Natsumi Ajisaka. And special thanks to Alletta Cooper.

And write us a review where ever you get your podcasts – tell us what you think. To find out what music we used in this episode and to see photos of the stockade… visit our website, storycorps DOT org.