On this season of the StoryCorps podcast, we’re bringing you stories about reuniting with people and places from our past. Sometimes those moments of connection are so extraordinary it can be hard to describe the feelings that surround them — the takeaways are intangible.

But often, it’s the tangible things that allow us to reconnect in the first place.

In this week’s episode, two stories about people reuniting with long-lost family treasures. 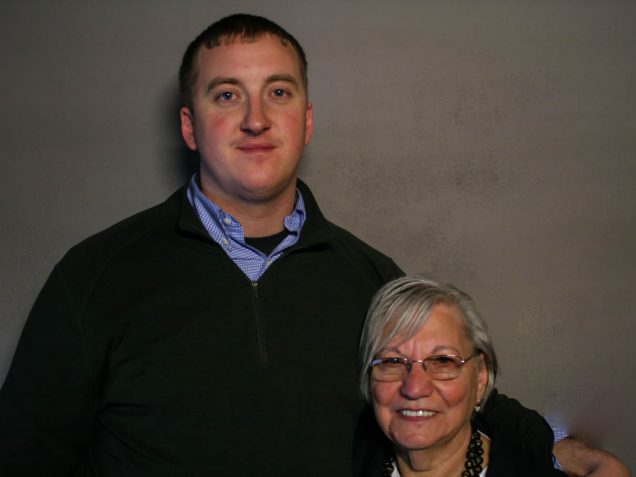 From an Army Major who tracks down and returns military medals, to a son who finds his father’s beloved electric guitar 25 years after his death; we explore the ways that objects can live on after a person is gone, preserving, and sometimes restoring, their legacy. 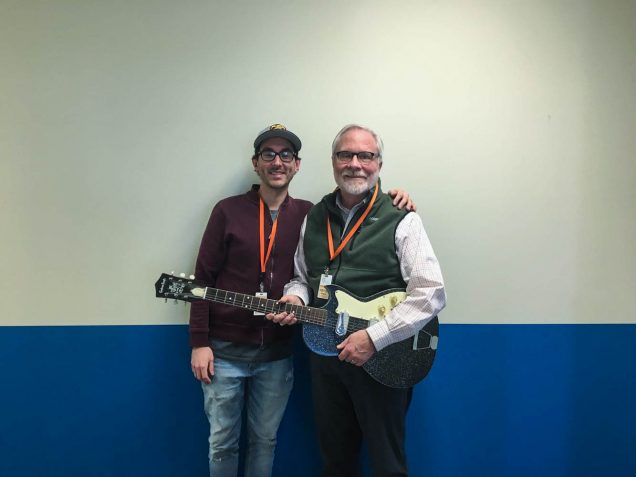 Bottom photo: Rodger McDaniel with his son-in-law Josh Jacobsen in Denver, Colorado after their StoryCorps conversation in December 2018.

“Alina’s Place” by Fredrik from the album Na Na Ni

Jasmyn Morris (JM): On this season of the StoryCorps podcast… we’re bringing you stories about reconnecting with people and places from our past. Those moments can be so extraordinary… it’s hard to put into words… the takeaways are intangible…

But sometimes, it’s the tangible things that allow us to reconnect in the first place……

Rodger McDaniel (RM): 25 years later, I got a call from a woman who said, ‘Are you Johnny McDaniel’s son?’ And I said ‘Yes.’ And she said ‘How would you like to have his guitar back?’

JM: In this episode…how reuniting with a long-lost object can give a family some long-awaited closure …

Adeline Rockko (AR): That night when you brought the medal down from your bedroom and I saw it was in the very same box that I had last seen it in, I knew it was in good hands.

JM: It’s the StoryCorps podcast from NPR. I’m Jasmyn Morris. Stay with us…

JM: With a new year, often comes new goals…or resolutions for the year ahead…and so we start this New Year’s day episode with a story about a man who has spent years focused on one specific goal…

Zachariah Fike is a Major in the Vermont Army National Guard. He’s served in the military for 20 years… and he received a Purple Heart for his service in Afghanistan in 2010.

But this wasn’t the first time he’d crossed paths with a purple heart. The year before… knowing Zac’s love of old antiques and thrift shops… his mother had given him an old purple heart for Christmas… It had an engraved name on the back… Corrado Piccoli.

After doing some research… Zac learned Corrado had been killed in Europe during the Second World War. So Zac tracked down his sister Adeline Rockko to return the medal to its rightful owner.

And they sat down together at StoryCorps… to remember when Zac first got in touch.

Adeline Rockko (AR): I flooded him with questions. Bang bang bang. One right after the other.

Zachariah Fike (ZF): ”What antique shop? Who are you?” She was very stern.

AR: After the conversation ended, I walked away from the phone and I says, “Oh my God, he’s so nice and he’s returning our medal and I treated him this way?”

So I called you right back again and apologized and thanked you then. Now this medal was very precious to my parents. And on special occasions, they’d take it out and let us touch it and hold it in our hand. And then my mother would put it back in the trunk in her bedroom. And for awhile I thought, Well, what’s the significance of this medal? But, as I grew older and missed my brother more and more, I realized well this is the only tangible thing that we have left. So I drove up to Watertown and met with you at your home.

ZF: Yeah… At that point I knew you meant business. I mean, to drive eight hours to come see me.

AR: That night when you brought the medal down from your bedroom and I saw it was in the very same box that I had last seen it in, I knew it was in good hands. And then you brought down your purple heart medal.

ZF: Yep… I was wounded in Afghanistan.

AR: And we got to know each other pretty well.

ZF: We together have talked about planning a trip to Italy and maybe walk some of the ground that your brother would have walked during the war.

AR: I would like to make that trip, really. We were very fortunate that you were the one who ended up with the purple heart and you’re part of our family now.

They haven’t made that trip to Italy, but it’s still something they hope to do someday…In the meantime, Zac went on to found the nonprofit Purple Hearts Reunited…which, to date, has returned more than 600 service medals to veterans and military families across the country.

And because of Zac’s work, a bill has been introduced to Congress that would make selling Purple Hearts illegal. The act is named after Adeline’s brother Private Corrado Piccoli.

Next, a story about how being reunited with a lost family treasure helped a son see his father in a new light…

For many, the New Year is all about looking ahead, but at StoryCorps, we also like to think of it as an opportunity to look back… That’s what happened when Rodger McDaniel came to one of our StoryBooths.

He grew up in Cheyenne, Wyoming, the oldest of four brothers… his parents divorced when he was a kid. and things were rocky for the family…

Rodger McDaniel (RM): Even though my father didn’t have much of a formal education, he taught himself to play the guitar by ear.

And what I remember, from my earliest years, were those Friday nights when he and his buddies would gather in the living room of our small home and they would each bring some form of guitar. There were steel guitars and electric guitars and acoustic guitars and bottles of whiskey. And they would sit around until the early hours of the morning playing their guitars and singing gospel music.

My dad, over the years, developed quite a problem with alcohol. I recall one evening, he had come home drunk, as he did too frequently. My stepmother, she had told him that, “If you come home drunk again, you sleep in the garage.” And so he headed for the garage and I caught up with him on the back porch of the house and said to him, “Dad, why do you do this?” He looked at me and he said, “It’s inevitable.”

And, dad died in 1969 in a one-car accident that was undoubtedly related to alcohol use. After his death we all searched for his guitar—that had really been a prized possession and had a lot of meaning for my brothers and me.

And then 25 years later, I got a call from a woman who said, ‘Are you Johnny McDaniel’s son?’ And I said ‘Yes.’ And she said ‘How would you like to have his guitar back?’

So I went over to see her and she brought out the guitar and it clearly was his guitar. And she said, ‘I went shopping at an old grocery store in south Cheyenne back in 1969.’

From the back of the room she could hear some beautiful guitar music being played and she said, ‘I sat and listened to it until they were done and then I rang the bell. And the butcher came out and I told him what I needed. And a few seconds later, another man came out, whom,’ she said, ‘I now know to have been your father.’ He looked a little bit intoxicated and he said: We just ran out of whiskey and money and I’d be willing to trade you this old guitar for a bottle of whiskey.’ And she said ‘I ran down to the corner liquor store and bought a fifth of whiskey and brought it back and made the trade.’

‘And I’ve had this guitar ever since and my two sons grew up learning how to play this guitar and now they’re grown and gone and I thought you ought to have it back.’

Really up until that time, my dad’s alcoholism and the problems that it brought to the family had defined him in my memory. But it was that story of his old guitar that caused me to think an awful lot about the meaning of grace and forgiveness and how much more than his alcoholism he had been.

JM: Speaking of grace…Rodger went on to spend his much of his career working in the field of alcohol and drug addiction…

…and after getting his dad’s guitar back, he tried to learn how to play it…unsuccessfully. So it sat in his closet for years. That is, until he got a guitar player for a son-in-law.

Rodger McDaniel (RM): I wanted it to be with a musician. It seemed to me that was the best way to make sure that my father’s memory stayed alive.

Josh Jacobsen (JJ): I remember feeling very honored, taking care of a piece of history that means something to your family. And, it just meant a lot to me… because you had a lot of trust in me.

RM: I remember the first time I heard you play it. To hear music coming from that old guitar was more meaningful than… I may be able to convey to you.

Do my grandchildren hear it?

JJ: Yeah… they’re familiar with the guitar. And, I play it. And, my hope is that someday I’ve got myself a little family band [laughs].

RM: Yeah, he didn’t leave much behind. And I think, over years, when we tell the little ones the story about their great grandfather, that this will help them learn a little bit more about who he was.

That’s it for this week’s episode. It was produced by Jud Esty-Kendall, Sylvie Lubow and me. Our engineer is Michael Raphael, script editor is Danielle Roth. Our fact-checker is Natsumi Ajisaka. (ah-gee-sah-kah). Special thanks to Michael Garofalo.

And write us a review where ever you get your podcasts — tell us what you think. To find out what music we used in this episode and to sign up for your own interview… visit our website, storycorps DOT org.

For the StoryCorps podcast, I’m Jasmyn Morris. Thanks for listening…and Happy New year.