During the 2016 presidential campaign, candidates have said and done things that, at times, have left voters with their mouths agape, unsure if they are watching an actual presidential race or a piece of performance art. While we’re now pretty confident that — for better or worse — we are seeing the real thing, this week’s episode of the StoryCorps podcast takes a look at a time when that was certainly not the case. 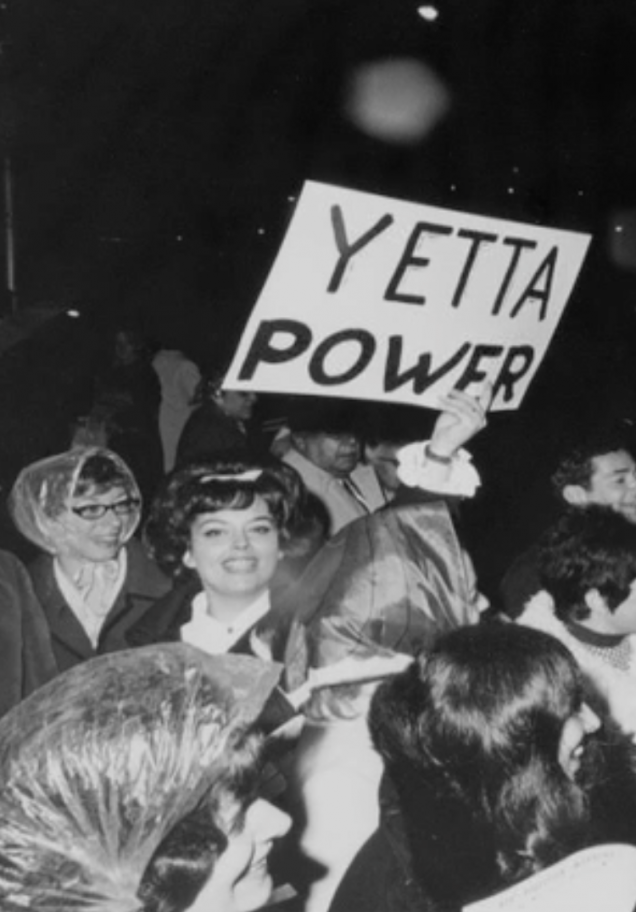 In 1964, Republican Senator Barry Goldwater from Arizona ran against Democratic incumbent Lyndon Johnson. President Johnson assumed office following the assassination of President John F. Kennedy and went on to win in a landslide. But another candidate in the race has been largely forgotten by history: Mrs. Yetta Bronstein, a Jewish housewife from the Bronx with a son named Marvin who played the drums—badly.

Created by professional pranksters and husband and wife team, Jeanne and Alan Abel, Yetta came out of their Chicago nightclub act and ran as an independent write-in candidate from the fictitious “Best Party.” Her platform included national bingo, sixteen ounces in every pound, and lowering the voting age so juvenile delinquents would have something to do. She also wanted to take Congress off salary and put them on a commission, and while she had no problem with gun ownership, she did want to decrease the velocity of bullets by 95 percent.

Jeanne Abel pretended to be Yetta for interviews with reporters, while Alan was her campaign manager. Together, they duped radio and television journalists using a photo of Alan’s own Jewish mother in their election materials. Yetta lost to President Johnson in 1964 and to Richard Nixon in 1968, in between she also ran for mayor of New York City and for a seat in Parliament. 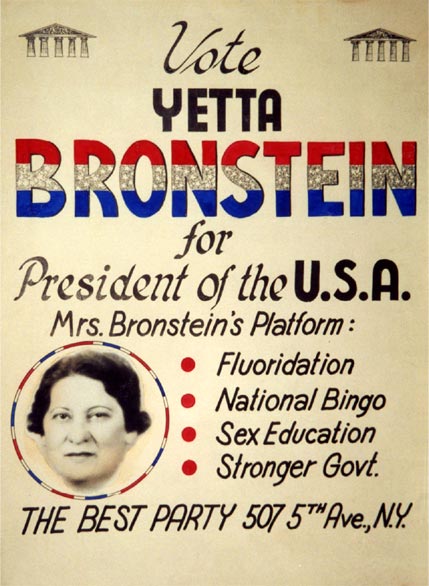 The Yetta Bronstein hoax is just one of scores of pranks the Abels orchestrated over the past sixty years. The one they may be best known for is attempting to advance the Society for Indecency to Naked Animals (SINA), which aimed, in the name of morality, to put pants on the world’s creatures. SINA’s slogan was, “A nude horse is a rude horse.”

Fake lectures at prestigious universities, a fake documentary about President Richard Nixon, the list of pranks the couple pulled on the public is, at times, unbelievable. Proving that for them no prank can go too far, Alan once even faked his own death, leading to a January 2, 1980, obituary in The New York Times. Two days later, for the first time in their history, the newspaper of record retracted an obituary explaining, “An obituary in The New York Times on Wednesday reported incorrectly that Alan Abel was dead. Mr. Abel held a news conference yesterday …”

Producers Michael Garofalo and Alletta Cooper traveled to Connecticut to record this interview, and once inside the Abel’s charming New England home, they saw towers of boxes filled with the evidence of decades of hoaxes and pranks, and then conducted one of the most freewheeling, raucous StoryCorps interviews ever.

Sidney Bechet – “When the Saints Go Marching In”