In this Valentine’s Day episode of our podcast, we look back on two classic love stories from the StoryCorps archive. 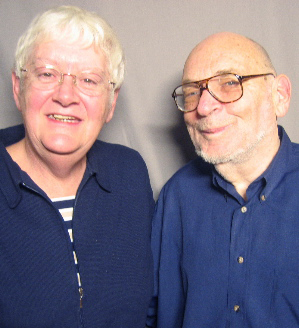 Danny and Annie Perasa (pictured above and at left) first came to our recording booth in Grand Central Terminal in 2004. At the time, Danny was working as an OTB clerk taking bets on horse races, and his wife, Annie, was a nurse. During their conversation, they shared the story of their first date and a bold question that Danny asked Annie that evening.

Over the next few years, Danny and Annie became a part of the StoryCorps family. Danny returned to the booth over and over, interviewing baseball umpires, police officers, and, of course, Annie. And when it came to talking about his wife, Danny proved to be a romantic with a gift for turning a phrase. He embodied one of the central ideas of StoryCorps—that there is poetry and beauty in the words of people you might not otherwise notice while walking down the street.

In early 2006, Danny was diagnosed with terminal cancer. The disease spread quickly and he wanted to record one more conversation with Annie, but was too sick to come to the booth. So, we went to their house in Brooklyn, where Danny recorded while lying on his couch with Annie seated next to him. We broadcast that interview in February 2006. That same day, Danny died. 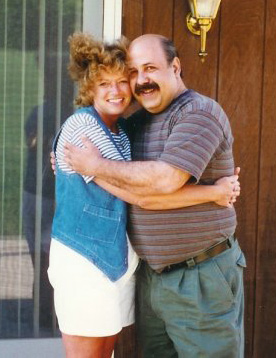 When we posted the news online, more than a thousand letters of condolence poured in from listeners. Annie carried copies of the letters with her as she walked behind Danny’s casket at his funeral, and buried another set with him that day. Today, she reads one letter each day in place of the love letters she had received daily from Danny.

Our second story was recorded as part of our 9/11 Initiative. Richard Pecorella and Karen Juday (pictured at left) were engaged and living together in Brooklyn when Karen, an administrate assistant at Cantor Fitzgerald, went to work on the morning of September 11, 2001. Tragically, she died during the terrorist attacks and Richie came to StoryCorps to share his memories of the woman who was the love of his life.

Richie, who suffered from a long illness and whose stories touched so many people, died on February 10, 2016.

Click here to watch an animated version of Richie’s conversation, “She Was the One.”

Like the music in this episode? Support the artists:
Welcome Wizard “Twelve Diseases”
Poddington Bear “Guestlist”
Ending Satellites “We’re from Near and Far”

Lisa Germano – Apathy and the Devil