Shotzy Harrison lived with her father, James Flavy Coy Brown, until she was three years old. But James, who has been treated for several different mental illnesses for decades, was in and out of Shotzy’s life as a result.

In 2013, James headed West and ended up at the Rawson-Neal Psychiatric Hospital in Las Vegas. But he wasn’t there for long. In fact, he was one of around 1,500 patients who’d been discharged without support services and bussed out of state and across the country.

As the state of Nevada cut funding for mental health services, the practice became more widespread. “Greyhound therapy” – that’s what Cynthia Hubert, a reporter for The Sacramento Bee who broke the story, called it. She found James and later called Shotzy to fill her in.

Shortly after they reconnected, Shotzy and James sat down for a StoryCorps interview where they were able to reflect on their relationship and the time they’d lost. 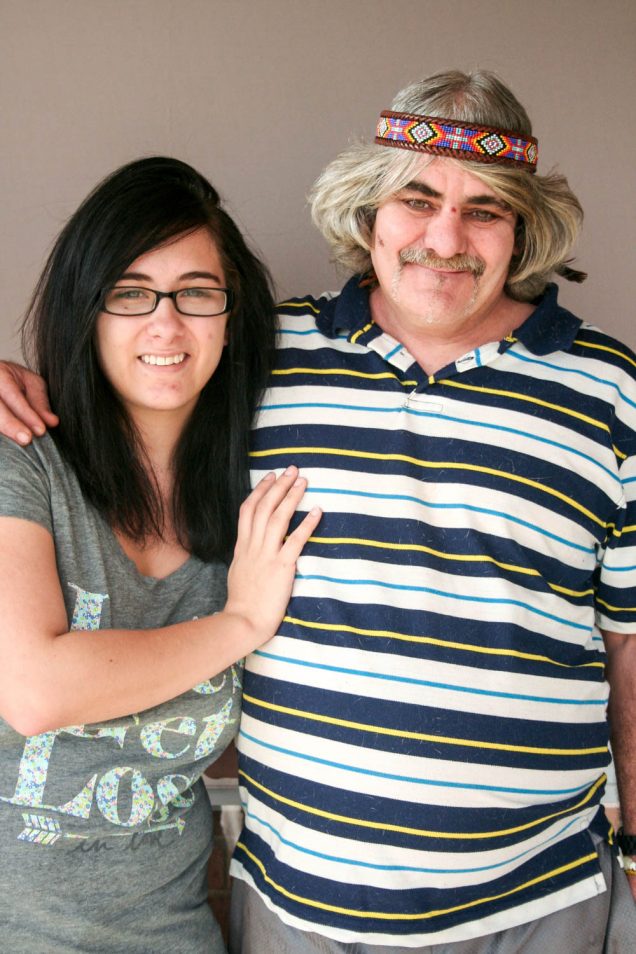 In this episode of the StoryCorps podcast, you’re going to hear parts of that conversation and an update from Shotzy five years later.

Bottom photo: Shotzy Harrison and James Flavy Coy Brown at their StoryCorps interview in 2013. Photo by Anita Rao for StoryCorps.

“Untitled #7,” “Untitled #4,” and “Untitled #8″ by Yusuke Tsutsumi from the album Birds Flying in the Dark

Jasmyn Morris (JM): On this season of the StoryCorps podcast from NPR…we’re bringing you 12 episodes on reunions…

That’s a word Shotzy Harrison knows all too well…

Shotzy Harrison (SH): The timelines of my dad going and coming from my life seem choppy because they are choppy. It was just sporadic phone calls, a postcard every once in a while.

JM: In this week’s episode, a complicated reunion between a father and daughter… and a daughter’s love—that exists alongside, and sometimes in spite of—her dad’s mental illness.

James Flavy Coy Brown (JFB): They found out that I was paranoid schizophrenic. And then, in my 20s, I started hearing voices in my head and they diagnosed me with psychosis. Some people don’t understand me and just avoid me because they’re afraid of me. So I’m just glad we have each other.

JM: People often come to StoryCorps to interview a loved one. They bring a family member or friend into one of our recording booths and ask each other questions. Sometimes, it’s the questions themselves that bring people closer together. But often, it’s the simple act of sitting down face-to-face that deepens their connection.

That’s what happened when Shotzy Harrison recorded with her dad, James Flavy Coy Brown, in North Carolina back in 2013.

Throughout this episode, you’re going to hear parts of that conversation and a follow up interview with Shotzy.

SH: My father has a Southern drawl. I think of, like, Yosemite Sam, almost like he’s trying to be funny, but that’s just his real voice.

SH: Daddy, you were with me from my birth until I was three years old.

JFB: Yeah… When I got off work I’d pick you up from the daycare center and I brought you one of those great big huge lollipops. And you’d ride in the front seat with me.

JM: But as Shotzy told us, when she was a toddler, her dad’s mental health worsened. Her mom grew more concerned, moved out of state with Shotzy, and eventually filed for divorce.

SH: But, when I was 16, my father came to town and we had a nice visit for a day. We would go driving together, and listening to music and singing along. There were no rules; drinking’s okay, cussin’s okay. You know he never cared what other people thought and he sort of allowed me to loosen up a little bit.

And then he just disappeared. I didn’t realize I wasn’t going to see him again for years.

SH: And then I somehow sniffed him out in 2011 and he was living, like, behind a hotel.

SH: How did you end up living in the woods?

JFB: I was evicted.

SH: So you just took your disability money and bought camping supplies?

JFB: Yeah… I went and bought a tent and a propane heater and a cook stove.

SH: What do you remember from the last time we saw each other?

JFB: We spent the whole day together. And y’all bought me a few things to help me out. And you were pregnant with your second child at the time.

SH: It was heartbreaking to see you. You were emaciated and I was scared to death for you. I had a little toddler and I was gonna give birth any day and there’s my dad, living in a tent in the winter and there’s nothing I can do.

JM: They talked about future visits, but the next time Shotzy went back to the campsite, James was gone. Shotzy would later learn that her dad headed west, and wound up at the Rawson-Neal Psychiatric Hospital in Las Vegas. But he wasn’t there for long either. After a couple days, James was discharged — along with several other patients — and taken to the nearest Greyhound bus station.

SH: From what I understand, Rawson-Neal was just sort of at its capacity for patients. So they put him on a bus to Sacramento with hospital paperwork that said, “Call 911 when you arrive in California” as the discharge instruction.

JFB: I got three days worth of my medicine, six bottles of Ensure, and four packs of cheese crackers.

JM: Next, how James found shelter. And, how Shotzy found James.

That’s coming up after this short break. Stay with us.

JM: When James got off the bus in Sacramento, he had nowhere to go and he eventually found himself at a boarding home. That’s where he met a reporter who had been canvassing homeless shelters, looking for anyone who had a connection to Rawson-Neal. It turns out, the hospital had put more than one thousand patients on buses headed for other states.

…That’s when Shotzy got the phone call she’d been hoping for.

SH: I was just so happy that you weren’t dead.

SH: I ran out the door and ran around in circles in my yard.

So as soon as I could make arrangements to get to you I did. And we just hugged and we laughed and cried. I showed you the pictures of my house. You know, “Here’s the basement I fixed up for you,” and you said, “I’m going to be living like a king.”

JFB: You rescued me.

SH: After we initially brought him home, there was like a honeymoon phase where we were laughing and listening to music, and everything was new and nice. But after a few weeks, I saw the more ugly side of his mental illness.

JFB: Do you ever worry about me living here with you and your family, Shotzy?

SH: I do. I have two young girls and I don’t always feel like you’re the best influence on them. You have bad manners and you curse and you smoke cigarettes. And it’s just that you’re a little rough around the edges and uncouth and not used to anybody, especially not your daughter, telling you what you can and can’t do.

JFB: Yeah, it’s hard to break old habits but I’m working on it.

SH: You’re part of the family.

SH: Me and you and the girls dance around like crazy fools in the kitchen. You have tea parties with my daughters. So many favorite moments between us…

SH: Which one pops into your head first?

JFB: That night I was feeling real bad, you held my hand to comfort me and you said, “Daddy, you can stay with me as long as you want to,” and I finally went to sleep.

JFB: Yeah… Shotzy, what are your hopes for me?

SH: I hope that your mental illness either stays stable or improves. We have so many years to make up for. You know, and I always appreciate you because I thought I lost you. I don’t see any reason not to be hopeful.

JM: It’s been five years since Shotzy and her father sat down for StoryCorps, and a lot has changed since then. Shotzy went through a difficult divorce… and while she left town, her father decided to stay. So he has once again disappeared from her life.

SH: And I absolutely want to reunite with him again. I don’t know if I’m gonna find him homeless or living in a tent again. And it’s in the back of my mind that he’s gonna be on his deathbed or already dead and I’m gonna find that public record. And, um, that’s a crushing thought but he’s popped up twice in the past so I just have to have faith he’s gonna pop up again.

JM: Today, Shotzy still looks for clues that might lead her back to her dad. She’s called local hospitals in the area where she knew he last lived and always answers the phone when it’s an unknown number just in case it’s someone with news about her father. Her most recent lead is from a class-action lawsuit against Rawson-Neal Hospital… ruling in favor of all the patients who had been bussed out of state, including James.

She hasn’t reached out to the lawyers yet, but it’s given her hope for another reunion. Until then, Shotzy holds on to the little things…

SH: Sometimes I’ll go driving; I’ll put on a country song and let the wind go through my hair and that will bring me right back to him.

One of the things that keeps me going and trying is I have a little of his stubborn will and I’m his only child and blood is thicker than all of the problems between us. And, um, there’s something powerful between a father and a daughter that mental illness and time hopefully can’t break. You have to let love win sometimes and choose love instead of fear. I can’t be his caregiver, but I’m certainly going to be his daughter forever.

JM: That’s it for this week’s episode. It was produced by Jud Esty-Kendall and me. Our engineer is or Michael Raphael, script editors are Danielle Roth and Sylvie Lubow. Our fact-checker is Natsumi Ajisaka. Special thanks to Michael Garofalo, Katilin Roberts, Anita Rao and Yasmina Guerda.

And write us a review where ever you get your podcasts – tell us what you think. To find out what music we used in this episode and to sign up for your own interview… visit our website, storycorps DOT org.