In 1968, just moments after Robert F. Kennedy was shot, a young photographer for The Los Angeles Times — Boris Yaro — captured the scene in an image that’s haunted the nation ever since. In this episode of the StoryCorps podcast, we remember RFK and we revisit the story of that famous photo. 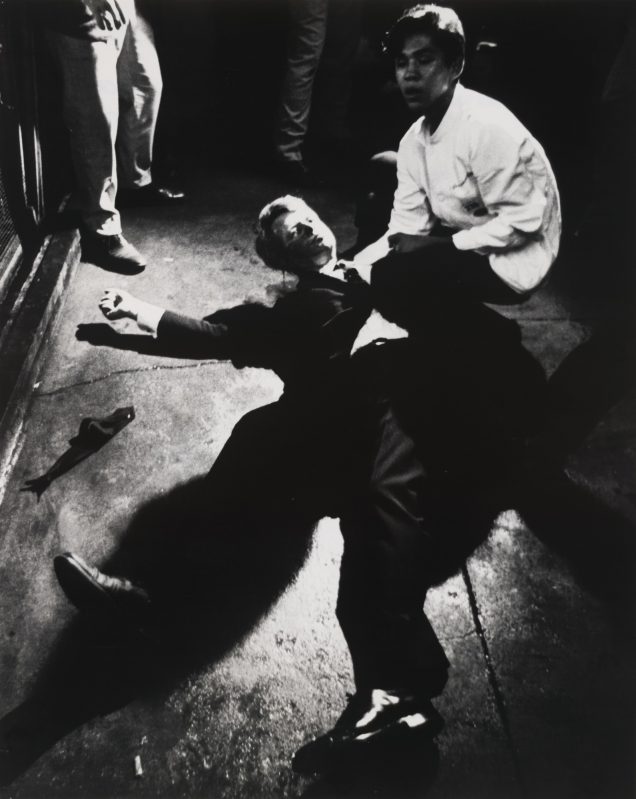 “Dancing Naked” by Alyssa from the album A Girl of Mystery

“Demus” by Charles Atlas from the album To the Dust: From Man You Came and to Man You Shall Return

“Snowfall” by S. Mcloughlin & A. Cooper from the album Natural/ Supernatural Lancashire

StoryCorps 533: The Senator, the Photographer, and the Busboy

Michael Garofalo (MG): Just after midnight on June 5, 1968, Senator Robert F. Kennedy and his supporters were celebrating at the Ambassador Hotel in Los Angeles. The returns from that day’s presidential primary were in, and Kennedy had won the state.

Robert F. Kennedy (RFK, ARCHIVAL): I want to express my gratitude to my dog Freckles [crowd cheers] and I’m not doing this in order of importance but I also want to thank my wife Ethel. [cheering]

But Bobby Kennedy’s campaign and the hope that it represented for so many people came to an end that night. Just minutes after giving that speech while he was greeting supporters in the hotel kitchen, Kennedy was shot in the head by an assassin named Sirhan Sirhan.

The moments after the shooting were captured on film by a young LA Times photographer. In the most iconic image, Kennedy lies sprawled on the floor. A teenaged busboy kneels beside him cradling the Senator’s head.

The image is still haunting 50 years later, and in this episode of the StoryCorps podcast from NPR, we’ll get the story behind that famous photo. I’m Michael Garofalo. We’ll be right back after a short break. Stay with us.

MG: Welcome back. In this episode we’re marking the 50th anniversary of the assassination of Robert F. Kennedy. And we’re doing it by telling the story behind an iconic photo taken moments after he was shot.

It’s up on our website, StoryCorps.org, but let me describe it for you now.It’s a black and white image with dramatic contrast between dark and light. Bobby Kennedy’s limbs are bent at awkward angles, his fist is clenched, and his head is cradled in the hands of a teenager. A busboy in a white uniform whose eyes are closed, but his mouth is open as if he’s calling for help.

We’re going to hear now from the man who took that iconic photo. His name is Boris Yaro, and for decades he was an LA Times photographer. Boris is 80 today and would probably still be working if he hadn’t had to retire after suffering a stroke, which as you’ll hear affects his speech.

The night Bobby Kennedy was shot, Boris’s editor had sent him home early, saying the next day’s paper was already full and he didn’t need anything else.

Boris Yaro (BY): I was watching the elections on television and the announcer said that Kennedy was in the lead and probably going to be the candidate. And I was living not far from the Ambassador Hotel, so I said, “To hell with it, I’m gonna go!” I had my press pass, but I wasn’t there on assignment, I was trying to find a picture of Bobby Kennedy for me, for my wall. He gave his acceptance speech, then got off the podium and decided to shake hands from well wishers.

And then, all of a sudden: pop! Pop! Pop! The crowd separated like Moses parting the Red Sea. And Kennedy was putting his hands up like a boxer, trying to avoid getting hit. Bobby, I saw him slump to the ground, and one of the first pictures that I took, Kennedy is sprawled out on the floor, and nobody around him except the busboy. His legs were splayed toward me, and I saw the blood dropping out of his ear.

I found the phone booth in the lobby, and told the editor, “Sir! Bobby Kennedy has been shot! And I have film.” He says, “Get down here now.” I ran into the Times office, finished dictating to a reporter what I had seen, and then I went back to the darkroom, and I cried.

I hate that damn picture. I had no copy in the house. I didn’t like it then, and I’m not crazy about it now. I had covered the Watts Riots, 1965. JFK was killed. Martin Luther King was killed. I was seeing anger in the world. And it was getting worse. Bobby Kennedy was going to be the knight in shining armor. And he didn’t get a chance.

What happened in the kitchen of that hotel on that night has also haunted the busboy in Boris’ photo. His name is Juan Romero and he immigrated to the US from Mexico as a child.

He recently sat down for StoryCorps and he remembered meeting Robert F. Kennedy the day before the assassination when Romero helped deliver his room service.

Juan Romero (JR): They opened the door and the Senator was talking on the phone. He put down the phone and says, “Come on in boys.” You could tell when he was looking at you that he’s not looking through you; he’s taking you into account. And I remember walking out of there like I was 10 feet tall.

The next day, he had his victory speech. So they came down the service elevator, which is behind the kitchen. I remember extending my hand as far as I could and then I remember him shaking my hand. And as he let go, somebody shot him.

I kneeled down to him and I put my hand between the cold concrete and his head just to make him comfortable. I could see his lips moving so I put my ear next to his lips and I heard him say, “Is everybody okay?” I said, “Yes, everybody’s okay.”

I could feel a steady stream of blood coming through my fingers. I had a rosary in my shirt pocket and I took it out, thinking that he would need it a lot more than me. I wrapped it around his right hand and then they wheeled him away.

The next day I decided to go to school. I didn’t want to think about it but this woman was reading the newspaper and you could see my picture in there with the Senator on the floor. She turned around and showed me the picture;“This is you; isn’t it?” And, uh, I remember looking at my hands, and there was dried blood in between my nails.

Then, I received bags of letters addressed to the busboy. There was a couple of angry letters. One of them even went as far as to say that, “if he hadn’t stopped to shake your hand, the Senator would have been alive,” so I should be ashamed of myself for being so selfish.

It’s been a long 50 years and I still get emotional; uh, tears come out. But I went to visit his grave in 2010. I felt like I needed to ask Kennedy to forgive me for not being able to stop those bullets from harming him. And I felt like, you know, it would be a sign of respect to buy a suit. I’d never owned a suit in my life. And so, when I wore the suit and I stood in front of his grave, I felt, uh, a little bit like that first day that I… that I met him. I felt important. I felt American. And I felt good.

RFK: We must recognize the full human equality of all of our people before God, before the law, and in the councils of government. We must do this, not because it is economically advantageous, although it is; not because of the laws of God command it, although they do; not because people in other lands wish it so. We must do it for the single and fundamental reason that it is the right thing to do… and the road is strewn with many dangers… First, is the danger of futility: the belief there is nothing one man or one woman can do against the enormous array of the world’s ills–against misery, against ignorance, or injustice and violence.

Each time a man stands up for an ideal, or acts to improve the lot of others, or strikes out against injustice, he sends forth a tiny ripple of hope, and crossing each other from a million different centers of energy and daring, those ripples build a current which can sweep down the mightiest walls of oppression and resistance.

MG: Senator Robert F. Kennedy speaking to the National Union of South African Students, an anti-apartheid group at the University of Cape Town in 1966.

Before that you heard Juan Romero, who was a busboy at the Ambassador Hotel where Kennedy was assassinated in 1968, and who was photographed cradling the Senator’s head in the moments after the shooting.

That’s all for this episode.

These stories were produced by Jud Esty-Kendall, David Herman, and me.

As always, you can find out what music we used on our website, StoryCorps-dot-org, where you can also see the photo we’ve been talking about in this episode.

Don’t forget to leave us a rating or review on Apple Podcasts or wherever you download the show. And if you want to leave a message for somebody you hear on this program, we have a voicemail it’s (301)-744-”TALK”, that’s (301)-744-“T-A-L-K” where you can leave them a message.

This has been the StoryCorps podcast. I’m Michael Garofalo. Until next time. Thanks for listening.