Longtime friends Barbara Parham and Jeanne Satterfield first met during the 90’s — two native New Yorkers who had moved to Boston and found a sense of community and camaraderie in the city’s LGBTQ burlesque scene.

The pair ran in the same social circle for a number of years, but gradually drifted apart. Barbara had moved back in with her mother and was caring for her during a serious illness. And Jeanne was working full-time as a licensed drug and alcohol counselor.

On this episode, how two friends fell back into each other’s lives, and together, found their way forward. 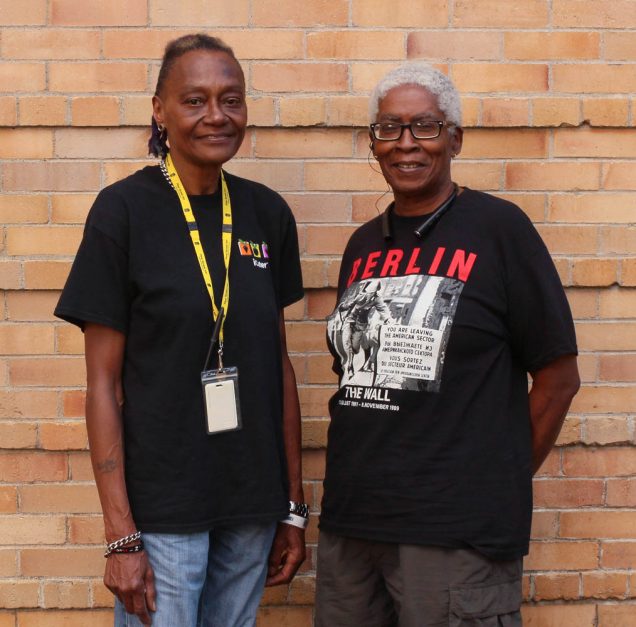 “Photosphere” by Charles Atlas from the album To the Dust: From Man You Came and To Man You Shall Return

Jasmyn Morris (JM): On this Season of the StoryCorps podcast from NPR … our theme is reunions…

Some that are planned, some years in the making, and some that catch us completely off guard.

Jeanne Satterfield (JS): I didn’t know what to do. I had never been homeless before. So, when I came through the door at the shelter, I was scared to death. But I remember seeing your face and I was shocked.

JM: In this week’s episode … how a chance reunion in a shelter brought two women closer to home…

Barbara Parham (BP): Meeting that day, honestly, I felt like, for once, divine intervention was in my favor.

In a typical StoryCorps interview, two people sit down together to have meaningful, uninterrupted conversation about the things that matter most. These interviews are then archived at the Library of Congress…so future generations can hear these stories told by the people who lived them.

BP: We instantly got along; we clicked. But  AND I had a nervous breakdown. You know, the crap hit the fan, splattered on the wall and Jeanne, you never looked at me any different and I always did appreciate that about you. So we used to see each other all the time.

JS: But then things just changed.

JM: As it sometimes happens with friendships, they lost touch for a time…

They’d run into each other on occasion …at the doctor’s office…once at a memorial service for a mutual friend… but they were leading separate lives.

Barbara had been living with her mother so she could take care of her during an illness. And when Barbara lost her mom in 2017, she also lost her home…

That’s when Barbara really reconnected with Jeanne – this time, at a place neither of them expected to be… a homeless shelter.

BP: When I got there it was raining very hard. I get to the front desk and I just cried.

JS: At that point, I was a licensed alcohol and drug counselor. And then, all of a sudden, I was going to be unemployed. I couldn’t afford anything at that point and I lost my apartment, Barbara. When I came through the door at the shelter, I was scared to death. I didn’t know what to do; I had never been homeless before.

But I remember seeing your face. And I was shocked. I go, ‘Barbara’ and I waved to you.

People were really astonished cause they said, ‘Oh, you two know each other.” I said, ‘We go way back.’

BP: I was disappointed for you…

BP: But on the other part I was glad.

BP: Cause to me, from that day, my whole life just felt easier. It helped me to be able to talk to somebody, believe it or not, who was like me.

We were like big sister little sister, sounding board, coach, therapist, for each other the whole time.

JS: I remember when we first started talking about getting an apartment together. We said, ‘Nah, no…’

JS: And then I remember when I said to you, ‘You know Barbara, we really need to consider this roommate thing.’

BP: We’re both in the same position. We both need each other.

JS: Mmm-hmm… And I just wanted to feel a part of a home, not feel as though this is my home, this is your home; it’s our home. So, we were able to get a place together.

BP: What I did learn is you don’t have to be alone and, meeting that day in that shelter, honestly I felt like, for once, divine intervention was in my favor.

JS: I don’t know where I would be if you and I didn’t run into each other at the shelter.

BP: This was a true test of friendship and time. And we’ve still had each other’s back.

JS: We’ve come a long way and I can’t fathom my life without you.

Next…Barbara and Jeanne invite us over… that’s after this short break.

JM: Earlier this year, Barbara and Jeanne moved into the apartment they now call home. It’s south of Boston…It has fresh paint, a good landlord, and a newly updated kitchen…

JS: Barbara does most of the cooking… And I’m in bed by 9. She’s in bed by… whatever…

You know but if she’s not here by a certain time, I’m wondering where she is.

BP: I can honestly that Jeanne is my keeper. And I know, I could say out loud, that I’m her sister’s keeper. And that’s what, I believe, helped us through this whole thing. We had each other’s back no matter what.

JS: What makes me happy?

That little bit right there with those four legs. Her name is Mama, Mamacita. That’s one. Two is the fact that I get up and I go out in the morning, but I know that I can come home. I got a roommate, I got a friend. I’ve got somebody I can talk to…

We’re at that age now where it’s about settling in and settling down. What we decided was no matter what we were gonna stick together and we’re gonna make this home. We’re grateful.

JM: …speaking of gratitude…we asked Barbara and Jeanne what their plans were for their first Thanksgiving in their new apartment….

BP: I’m probably going to end up at the shelter serving.

JS: Mm-hm. Each year changes, so now we’re in a different position but we’re still going to give back. Because we don’t forget where we came from.

JM: That’s it for this week’s episode. It was produced by Jud Esty-Kendall and me…

Our engineer is David Herman, script editors are Sylvie Lubow and Danielle Roth…Special thanks to Jenn Stanley.

And tell us what you think — write us a review where ever you get your podcasts.

Also – you can record your own family this Thanksgiving. Go to the Great Listen dot ORG to find out how to get started.

For the StoryCorps podcast, I’m Jasmyn Morris. Have a happy Thanksgiving…