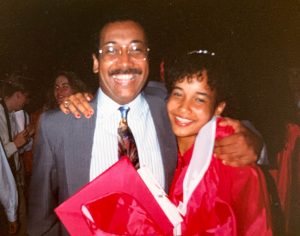 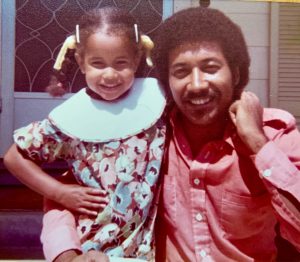 EH: I remember being excited hearing stories about how cold Iowa was and like just trying to stick our heads in the freezer to try to get ready for it, to see what it might be like. And I remember getting to Iowa and just thinking there was so much open sky and everything was covered in white. It was really beautiful.

EH: But one of the things with a place like Iowa City, where the people are really nice, is that it has this false sense of security. But, when people slip up and you actually see what’s behind that veil, or you go to their house and you see a rebel flag on a pillow case, it feels like such a kick in the gut and was really terrifying.

EH: One of the things that has stayed with me was that people were constantly trying to touch my hair. I remember one time when I was sitting in an assembly, and when I got out my hair was filled with staples. Someone had just stuck them all through my hair. It took me so long to get it out. And I was just mortified, and so deeply hurt because I knew all the people sitting around me. But no one stopped them. No one said, “hey, someone’s putting staples in your hair.” You know?

GB: That is abuse…and I had no idea that you were going through that. I think I was just so happy that I didn’t have to worry about you being shot at or chased down the street. You know what I mean?

GB: When I was in about the sixth grade, our elementary schools, they were always in white neighborhoods. And some of us, walking home, would walk across just the corner of these lawns as a shortcut. I didn’t realize that we were actually stepping on these white people’s property. But they realized it. At one point, one couple was sitting on their porch with guns daring us to step on the grass…Never told you that, huh?

EH: The grass is more important than you kids.

GB: Ya, so I was preoccupied with protecting you from that kind of thing.

EH : You know growing up, you raised us to be hyper aware of our Blackness. But in that awareness, to really instill in us that we do belong here and that America is our country, anywhere we go belongs to me.

EH: I remember one time, it was just you and me. And we’re sitting by the lake and you were just trying to get me to relax because I had my collar buttoned up all the way. And you just telling me that you don’t have to worry about anybody thinking you don’t belong here. This is ours too.

Even now, I hear that in my head. And I was just so lucky to have a father tell me my worth.