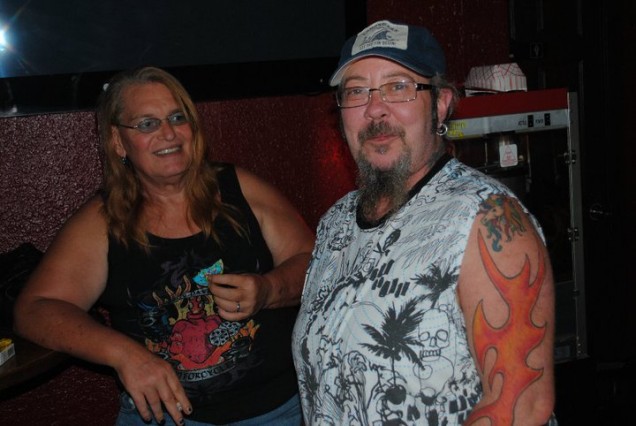 SF: Blue was, 6 feet tall, weighed about 230 pounds, she had a big smile, had red hair and brown eyes, had been a trucker all of her life. So, she was very rough around the edges. If I’d get to drinking, and I’d get a little redneck, and I’d get in someone’s face, Miss Blue would step in. And I’d be like, ”Really, I don’t need you to take up for me.” ”Yes you do, shut up and sit down.” ”Oh, okay.” She’d also been a biker. Blue was in an all-male motorcycle club, and they had never had a woman, ever. So Blue was the first.

SJ: So the way that I know you. You and Blue were sort of the mama and the papa of the trans community. Did you and Blue intentionally do that?

SF: Well, Blue was having problems. Her sisters weren’t accepting her. Her son wasn’t, and his wife, and then when the grandchild was born, they wouldn’t let her see the grand-baby, so yeah I think it was a lot to do with what Blue was feeling.

SJ: I saw so many people coming to your home, trans folks when your Blue was home and she was dying. The day that she was dying. She had been comatose the whole day, and she kept fighting for every, every breath. And then it dawned on me, three days before she was on the couch, watching TV, and she started crying. And I said, ”Baby, what’s the matter?” And she said, ”I promised when we got together I’d never leave you, not even death was gonna take me.” And I thought, ”Is that why she’s fighting so hard?” And so I whispered in her ear, I said, ”You’re really not leaving me, I know that.” And she took one easy breath, and was gone.

SJ: I loved that her motorcycle was right up there by the casket.

SF: What she wanted was to be embalmed and set on her motorcycle. And I’m like, ”No, I’m not gonna do that.”

SJ: She was dressed how she wanted to be dressed.

SF: She had her t-shirt on that said ‘You never seen a motorcycle parked outside a psychiatrist’s office’. She had her combat boots on. So yeah, she was good. She’s the only person I ever met that ever treated me like I was me. You know they say there’s always that one person your soulmate, and I think Blue was mine. I really do.

story
“I wish I had had the choice.”

“I wish I had had the choice.”

Ms. Betty Thompson talks about her work at the last remaining abortion clinic in Mississippi, and what led her there.