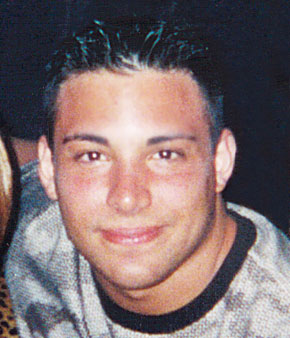 New York City firefighter Michael D’Auria (pictured at left) had only been on the job for nine weeks when his engine company rushed to the World Trade Center on September 11, 2001.

He and four other members of his company were among the first responders killed that day.

Nancy Cimei came to StoryCorps to remember her son.

NC: My husband said to me that two planes hit the World Trade Center. And then my first question was, Do you think Michael is there? Michael was assigned to Engine 40, Ladder 35. It was on the Upper West Side of Manhattan so thinking that it was kind of a distance, I had hoped that he hadn’t responded. That of course wasn’t the case.

We tried calling the fire house and none of the men were there. And, from that moment on, I did not move from the TV. I would go in his room and spray his cologne or find my daughter on his bed, smelling his pillow. It was excruciating to think that he was buried and injured and I was his mother and I couldn’t help him. He was considered missing–that’s all they said. He was lost.

But, on New Year’s Eve, that same year, at twelve midnight, Michael’s alarm clock went off. He was found at 1:30 am. Just an hour and a half later. I felt as if it was so final at that moment. I always had that feeling in the back of my head, Maybe he’ll come home. I knew it wasn’t true but you can’t help having that feeling. But I consider myself one of the lucky parents because I was able to bring Michael home. And I got the chance to hug my son, one last time.