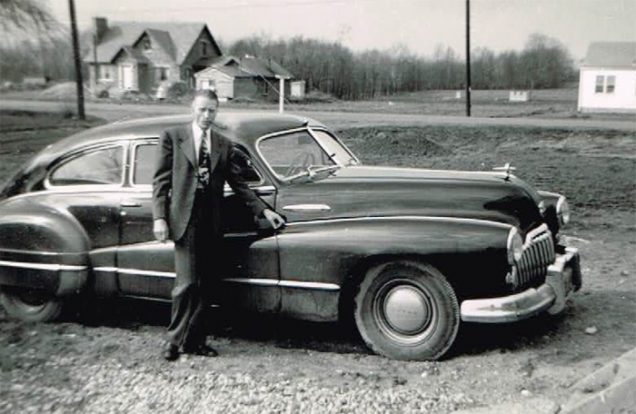 Leonard Carpenter worked for BFGoodrich in Akron, Ohio, where he also raised his family. According to his daughter Lynne, he always kept a comb, handkerchief, and penknife in his pockets and used clippers to cut his grass “because he wanted every blade of grass to be exactly the same height.”

His grandson Jack Bruschetti was born in 1999, the same year Leonard died from Alzheimer’s disease at the age of 86.

At StoryCorps, Jack, 13, asked his mother, Lynne, to share with him more about his grandfather.

Above: Leonard Carpenter in Kentucky, where he grew up, in the early 1940s. Photo courtesy of Lynne Bruschetti.

LB: It was very important for him to be in control at all times. We lived in the city, and we had very tiny yards, and he didn’t use a lawnmower. He used clippers because he wanted every blade of grass to be exactly the same height. We could play in the driveway, on the sidewalk, in the middle of the street, but we were not allowed in that showplace yard of his.

And in his pockets he always kept a comb, handkerchief and a penknife. And the handkerchief was always clean and pressed. He would use a handkerchief not to blow his nose, but to clean. If there was like a mark on the side of our house, he would wipe it.

And when I was a teenager, I was starting to lose respect for your Grandpa Leonard.

LB: I resented him always wanting to keep the house perfect and always being in control, and I was starting to realize that he wasn’t that educated. But, at that time, we were active in our church, and the church asked him to be president of the trustees. And I was shocked, like why would they want him to be president?

There was tension in the church–things weren’t going very well, and people weren’t agreeing with each other.

And in the trustee meetings, Grandpa Leonard got some apples. First he would pull out his handkerchief and he would wipe the apples and make them shiny. And then he would pull out his penknife. And he’d always cut so that there was just one long apple peel. And as they’re arguing, he would slice the apple, put it on the penknife, and hold it out to each member of the trustees. And every meeting, they would eat apples together. And they started getting trust back. And so he had that ability.