Growing up, Monica Velez was a mother figure to her two younger brothers, Andrew and José “Freddy” Velez (pictured together above, in 1996).

But her brothers both left home at an early age; Freddy (above left) joined the U.S. Army when he was 18 and deployed to Iraq. When Andrew (above right) turned 18 two years later, he followed his brother into military service and deployed to Iraq and Afghanistan.

Corporal José “Freddy” Velez was killed in action in Iraq in 2004. He was 23 years old and was posthumously awarded the Silver Star for outstanding service.

Specialist Andrew Velez had the difficult task of escorting his brother’s body back to the United States. Two years later, he committed suicide in Afghanistan. He was 22 years old. Before he died, Andrew received the Army Commendation Medal. 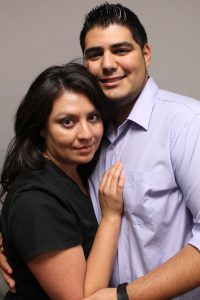 Their older sister, Monica, came to StoryCorps with her husband, Christopher Hernandez (pictured together above), to remember her brothers.

CH: What is one of your favorite memories of all three of you guys together?

MV: One day when they both came home from basic training, they did a demotion party where they told me I was no longer allowed to be bossy. I couldn’t tell them what to do or what to wear. And they kind of started telling me how to grow up and live my life as a young adult instead of acting like a mother.

CH: Do you remember what it was like when Andrew deployed?

MV: Andrew deployed straight from basic training–so we didn’t get to see him. Then Freddy deployed shortly after Andrew. I was a little nervous, and I was scared. I remember there was this string of lights at the restaurant where I worked at. And I I thought if I lost my brothers it would be like if you cut both sides of that string of lights and that middle light would just fall and break. That would be me–I wouldn’t be able to make it. And it was just such a good feeling when they would call home. Andrew would be very descriptive– he’d just let you know, I can smell dead bodies, and, when you shoot somebody they don’t get back up–he would just tell us what it was. Freddy was more private about it. He always made everything sound like he was lying on the beach, taking in the sun, having martinis. He never made it sound like it was bad. I think Freddy was more trying to like protect us. Freddy was killed in action in Iraq. The Army asked Andrew to escort Freddy’s body back to the States for the services. And, I talked to Andrew throughout the trip, and he started telling me these horrible things about how every time they stopped they would make him open Freddy’s bag up, and he’d have to look at Freddy’s body. I didn’t know what to do. I didn’t know how to help him. Freddy died in 2004, and then Andrew died in 2006 by suicide in Afghanistan. My brothers were like my soul mates, and when my dad passes away there won’t be anybody else but me. I just miss my brothers. And so I try to remind myself every day that I have to earn what I get to love each day. It’s a gift.