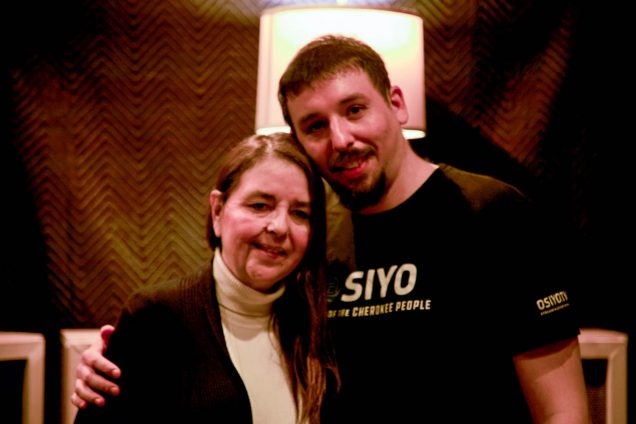 GO: People thought that we would be the laughing stock of all tribes if we had a female leader.

GO: There was one time when the five civilized tribes had, like, a joint meeting and they purposefully left her out.

KQ: Right. They didn’t have a chair for her.

GO: Yeah. So, she found a chair, dragged it in and forced her way up to the tables. They get through everything, and they were adjourning the meeting and she stood up and said, ‘No, I have something to say.’

KQ: And she was heard. People respected her fully after they gave her the moment.

GO: And in the second election, she won by almost 83 percent of the vote. She did what she needed to do to prove those naysayers wrong.

KQ: Right. But, to me, she was just grandma. We would be joking and dancing and acting a fool together and having a great time.

GO: How did you feel when she came to your games ‘cause, you know, she had that scream that everybody in the whole place could hear?

KQ: [Laughs] I love that other people got to see that human element of her. She doesn’t have to be the epitome of strength and grace at all times. She gets to have fun, too.

GO: Mm-hmm. But, your cousins still called her grandma Chief.

GO: You know, it took me a long time to think about whom I was gonna sit across from in this interview, and I picked you because you were the closest that I had to her.

KQ: It’s a gift to be here and I definitely attempt to model myself after her.

You know, I had a friend of mine whose little girl wanted to do her end of the year essay about grandma. And to hear that people still think about her… Um, I mean, she’s gonna be on the quarter soon. Who would have ever imagined a Native American woman would have been on the quarter of the United States of America. I mean…

KQ: It really is.