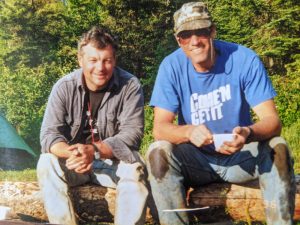 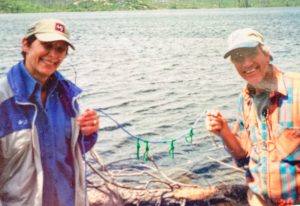 GK: I remember seeing you in the medical library, the smoking lounge, and I used to bum cigarettes from you all the time.

GB: And you introduced me to Janet.

GK: Yep, she was just a hoot. And I said, you know, I think Zooks would like this gal.

GB: We started dating immediately. I owe you one for introducing us.

GK: We always did something wild and crazy.

GK: Well you know, during that period of time on my first canoe trip. That was the beginning of many adventures for us. I used to like to serenade you from the stern of the canoe.

GB: Yeah. You know, one of the things that sticks in my memory is, all the canoe trips that we did, you kept notes of every day. And I remember you coming down when Janet was sick and you brought one of those journals with you and you read it.

GB: You read to her about one of the trips that we took and I don’t know if she heard you, but I did.

GK: Yeah, I just thought it might be fun to relive that.

GB: I will never forget that.

GK: Well, I’ll never forget all the wonderful things you’ve done for me over the years either, so, we’re stuck with each other.

GB: I think in her memory, we should go out and do something really stupid.

GB: You’ve been a great friend. I don’t know that I’ve ever adequately said thank you. But… thank you.