In the final days of Don’t Ask, Don’t Tell, Navy Operations Specialist Sean Sala decided to do what had never been done before: march with an active duty military contingent in a Pride parade. It was July of 2011, just two months before the end of the policy that barred LGBTQ people from serving openly in the armed forces.

Sean teamed up with San Diego Pride organizer Fernando Zweifach Lopez.  At StoryCorps, they remembered how they pulled it off — and what it was like to see over 200 service members show up at the starting line. 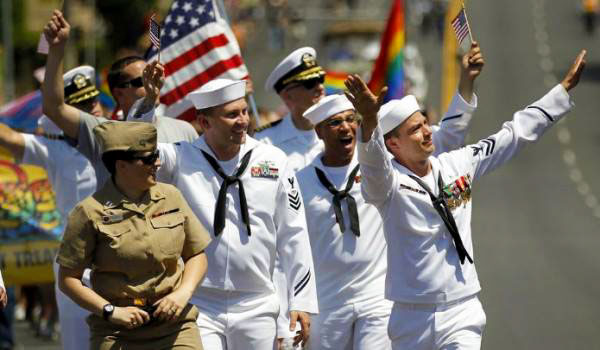 SS: There were people that killed themselves over Don’t Ask, Don’t Tell. So I felt like I needed to do something to get even with the policy. So, I registered the float. And then there I was on TV saying that this needed to happen, and I didn’t tell my command I was doing that.

FZL: Oh, that’s right, that’s right. You know, I personally wasn’t prepared for the backlash that we got internally. I remember two older lesbian veterans who approached me at a bar, and they told me that I was going to do so much harm.

SS: I did get a lot of people that were like, ‘You’re gonna get people kicked out, what you’re doing is wrong.’

FZL: You called me in tears. And I said, ‘Look, there are always gonna be people who are gonna tell you ‘No.’ And you have to just know that what you are doing is the right thing to do.’ And, the news just —

FZL: We lined up and then, the parade kicked off and it started with the military contingent. It was sort of really just quiet in anticipation of what was about to happen.

SS: When we turned the corner, the sound of the crowd, I will never forget that. People…people were screaming.

FZL: I remember seeing this senior veteran in a wheelchair crying, and he stood up. And, it was just so meaningful. And that, that’s I think what so many people realize, is that’s the first time they feel like they’re home, is at a Pride event.

SS: As much as we did deal with B.S., tons of people showed up, saying, ‘Thank you for what you’re doing.’ I was like, wow this is, redemption. We got it done.