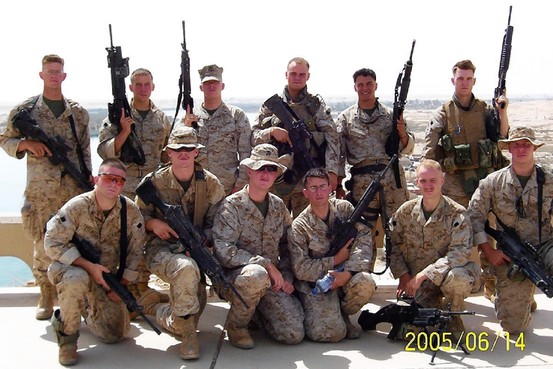 TW: That morning, we loaded into the vehicle. And I get tapped on the shoulder and I got told that I need to bounce up to the next vehicle. I said, “Catch you guys on the flipside.” And that was the last thing I ever said to them. Next thing I know, I just hear the loudest explosion. And I see, that’s my squad’s vehicle that got hit. The bomb flipped it upside down, it ripped it completely in half, and everything inside of it was just parts. And uh, we got to wait for the chopper to come recover them. So the guys from the rest of our platoon had to go out there with blankets and cover up these body parts, so dogs don’t come and grab my friend’s arm and have a meal. When I got back into our room for the first time, it was just a mess, you know. We had to spend the next couple of days just packing all this shit up, and mailing it home to their families. Mailing their letters that they hadn’t mailed, and cleaning up the dishes that they hadn’t cleaned up and… There’s dirty laundry… It was all I had left of my friends. And uh, when I got home, I knew that I would meet these guys’ parents, their girlfriends and their brothers and sisters and…It’s hard because I feel guilty for being the one guy left. But I also feel a responsibility. I better make sure that everybody knows who these guys were, what these guys did. And you know, I am most proud of not blowing my head off by now. It’s just a whole lot easier if you’re dead. But that shouldn’t be your tribute to your dead friends. When they’re looking down on you, they don’t want you to be living in the moment that killed them. You made it. You got home. You should honor their memory by living the life that they didn’t get to live.