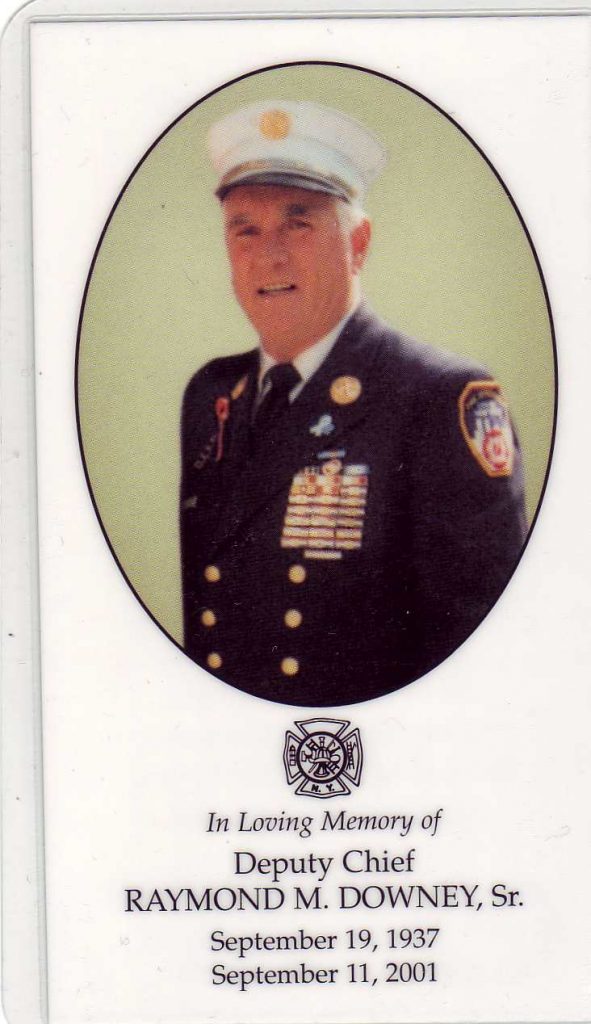 Chief Downey was one of the nation’s leading experts on rescue operations at collapsed buildings having overseen search-and-rescue work after the Oklahoma City bombing in 1995.

His wife, Rosalie Downey (above left), remembered him in a StoryCorps interview with their son, Joe Downey (above right), who is himself a Fire Captain.

Photograph courtesy of the Downey family

RD: That summer he came home and he told me that Mayor Giuliani was going to honor him for all the work that he had did for the City, and he was, like, overjoyed. When we were coming out of Gracie Mansion, he carried me out and we were laughing, and he said, ”Ro, there is nothing else that I would ever want.” He had reached the pinnacle of his life.

That day, September 11th, my boys went down looking for him and my family came over and we sat and we sat. You know, we used to kid him that he was Clint Eastwood and I guess I try to visualize him coming out of the dirt, cleaning himself off.

And that night, Mayor Giuliani came on saying that he lost some of his top men. He mentioned Ganci, Feehan, and then he said, ”Someone who I just had honored at my house, Ray Downey.” And I said, ”No it cant’t be.” We didn’t know anything yet. My son called and said, ”Ma, don’t worry, we’re still looking.

And i just prayed and prayed for weeks, never giving up because we were married 40 years and Ray gave me this angel pin that was a fireman. And I said to my kids, ”You know what? maybe I’ll send them to all the wives who lost their husbands. And maybe it would help us, this angel.

So we stayed up for hours, my sons getting all the addresses, my daughters and us writing them all out and then delivering them to all the firehouses. and I thought that by reaching out, that God would reach back and give me Ray. But when I went down to the site after many months, it was so devastating. And I knew he wasn’t coming home.

We did have 40 years of happiness, but I wish I had more time, because after so many years, there’s that special bond you have, that just being there was enough. And that’s what I miss. I miss that a lot.