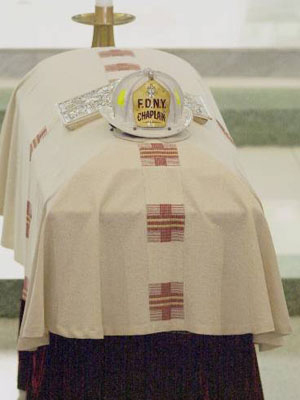 Father Michael Duffy received two unsettling phone calls following the 9/11 attacks. The first informed him that his close friend and mentor, Father Mychal Judge, had been killed at the World Trade Center. During the second call, he learned Father Mychal had requested that Duffy give the homily at his funeral.

The two Franciscan priests met in the 1970s, when they were assigned to the same parish in East Rutherford, New Jersey. Father Michael eventually settled in Philadelphia to work with poor communities there, while Father Mychal found his way back to his native New York where he ministered to everyone from the homeless to the mayor.

On September 11, Father Mychal was serving as chaplain to the New York City Fire Department. That morning he found himself where he always seemed to end up—right in the thick of things. He arrived at the World Trade Center shortly after the first plane hit.

FMD: My name is Father Michael Duffy, and I am a Franciscan Brother to Father Mychal Judge. We Franciscans are a little odd and one of our oddities is there’s a form we fill out and it’s called ”On My Death.”

It says where you want your funeral mass to be, who you want to do the homily, and et cetera like that. So, 9/11 happened on a Tuesday. Well, the next day the phone rang and it was our provincial in New York and he said, ”Mychal wanted you to do the homily.” And I said,”Well yes, but this is different. It should be someone with a little more import. So, I think you should do it.”

And there was a long pause. And he said,”But Mychal wanted you.”

So, I mean, what are you going to say to that?

ARCHIVAL TAPE ”Family and friends of Mychal Judge. Good morning everyone. . .” I said to myself, when I see Mychal I’m going to kill him. (Laughs)

ARCHIVAL TAPE ”I stand in front of you and honestly feel that the homilist at Mother Teresa’s funeral had it easier than I do.”

There were 3,000 people at his funeral. The church wasn’t big enough to hold them. They were outside. Bill Clinton was there, Hillary Clinton, all New York. And the moment arrived, I stood up and I reached in to get my glasses and couldn’t get to the pocket because my vestment was covering them. Thank goodness I’d practiced it because I couldn’t read it!

ARCHIVAL TAPE ”He loved to bless people. And I mean physically. Even if they didn’t ask. A little old lady would come up to him and he would put his big thick Irish hands and press the head til I think the poor woman would be crushed.”

Everyone thought Mychal Judge was their best friend. He’d remember significant things in their life and he would write a little note — just one or two lines. Of course, they’d write him back. So, he had a big black satchel filled with letters to answer.

ARCHIVAL TAPE ”He would say to me once and a while, ’Michael Duffy’ — he always called me by my full name — ’Michael Duffy, you know what I need?’ And I would get excited because it was hard to buy him a present or anything. I said, ’No, what?’ ’You know what I really need?’ ’No, what Mike?’ ’Absolutely nothing. I don’t need a thing in the world. I am the happiest man on the face of the earth. Why am I so blessed? I don’t deserve it.’ ”