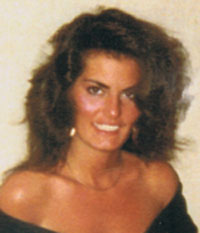 Marisa DiNardo (pictured at left) worked in the World Trade Center, where she was killed on September 11, 2001.

Her mother, Ester DiNardo (pictured above), came to StoryCorps to remember the final night she and Marisa together. They celebrated Ester’s birthday at Windows on the World, the restaurant at the top of the World Trade Center’s North Tower.

Marisa died in that same building the following morning.

Photo courtesy of the DiNardo family

ED: The last time I saw my daughter was the night before September 11. It was my birthday and she asked me if I would like to go spend my birthday at the Windows of the World and I said, ”Yes, I’d like that.”

So, we all went there, the whole family, and during the night we stopped by the windows and I said, ”What a beautiful place! I feel like I’m up in heaven, it’s so pretty.” And she said to me, ”Mom, I got you on the top of the world.”

The next morning, when I saw the plane just hit the North Tower, and that’s where she was, I said, ”I know Marisa’s very strong, she’s very soft-heart and she always helps other people.” I said, ”Probably she’s helping somebody, probably she got down.”

I could not think that she was not around anymore. About a year later, a policeman called me and said, ”Your daughter’s name was Marisa DiNardo?” And I said, ”Yes, Why? You found something?”

He said, ”Well, we found her pocketbook.” He told me to go pick it up and that’s when it really felt that she was not here anymore. When I found the pocketbook.