Chloe Longfellow’s father died when she was just 3 years old. In order to support her family, Chloe’s mother, Dorsey Romano, was forced to take on a variety of jobs, some of which required her to work the night shift.

With her mother away, Chloe spent a great deal of time at her grandparents’ home becoming especially close with her grandmother, Doris Louise Rolison.

Despite living in the Arizona desert, Doris, who died in May 1988 at the age of 67, maintained a lush garden of herbs and vegetables. Chloe would help harvest the food to make dishes from recipes found in one of her grandmother’s treasured cookbooks (see below).

At StoryCorps, Chloe remembers the happy memories and life lessons taught to her by her grandmother, many of which took place while cooking in Doris’ kitchen. 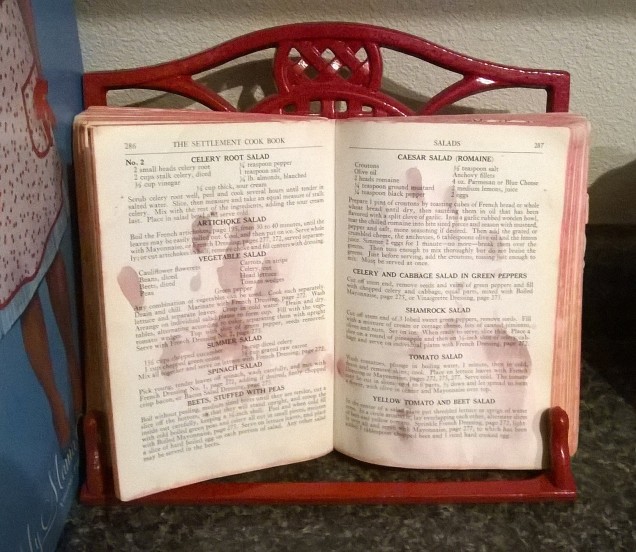 Chloe Longfellow (CL)
CL: She had red hair–it was red hair out of a bottle, but it was still red hair. And she was a spitfire. If you messed with her and she didn’t think it was right, she would tell you. But I do remember that she always smiled with her eyes. Even when she was angry, even when she was tired. She was my very first best friend. It’s really surprising the amount of life lessons you can learn in a kitchen if you have the right teacher. She used to try to tell me about acceptance and how to be a good human being. She’d get all the ingredients for a soup and she’d look at it and she’d go, “Now see honey, this is how the world works: some people are onions some people are potatoes. It would be a really boring soup if you just put potatoes in there, wouldn’t it? But if you add leeks, if you add some bacon, then you make this wonderful thing. And all these different people come together to make this wonderful thing called our world.”And one time she had grown some beets. And we brought ‘em in, cleaned ‘em off. And I got to move the page in the cookbook. And I had beet juice all over my hands and I left a little tiny handprint on her cookbook. And I started to cry ‘cause I thought I had ruined it. That was grandma’s favorite book. But she took a piece of beet and she covered her hand and she put her handprint on the other side and made our thumbs touch in the print. And said, “It’s perfect now.” If I really miss her I can just open the book and go back to that page. She touched it so often that it still smells like her, even all these years later.She used to tell me that the sky was black velvet and the stars were holes that had been punched in the ceiling of heaven. And that was how our loved ones looked down at us and saw if we were doing wrong, or if we were doing right, or just check in on us every so often. So, every time I look up at the sky, she’s there.

story
“I decided to adopt that magpie, which I called Maggie.”
2:49

“I decided to adopt that magpie, which I called Maggie.”

Shig Yabu tells his grandson Evan about an unlikely friend he made as a Japanese American internee during World War II.

story
“I thought “you know if you don't try, you’ll always regret it”. So I wrote her a letter…”

“I thought “you know if you don't try, you’ll always regret it”. So I wrote her a letter…”

Eddie Chang came to StoryCorps with his daughter Tria, to talk about how he met her mom, E.F, and what they miss most since her death.

“If your heart is pure and your goal is right, you can't go wrong.”

Kate Quarfordt and her dad Kevin Craw remember the night that an impromptu singing performance helped Kate embrace the unexpected.

“I didn’t know if I would ever be close to anybody.”

Growing up, Derrick Storms tormented his little brother, Raymond. Years later, they talked about how they transformed their relationship.

Get our Story of the Week email delivered every Friday. SUBSCRIBE