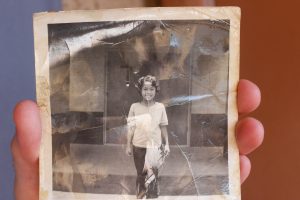 Host: This story comes from the Hawaiian island of Molokai, the site of America’s largest leprosy colony, Kalaupapa. There, sick patients were quarantined.

For many years leprosy was widely misunderstood and some wrongly believed you could catch it from a handshake. All in all, around 8,000 people from across the US were ripped away from their families, exiled to a colony with little chance of survival.

Doug Carillo and Linda Mae Lawelawe came to StoryCorps to talk about how their lives were shaped by the disease.

DC: And our dad was sick for six years in Kalaupapa … And we knew that he got married to some woman. But he got cured, so he came back home and he just said, ‘You have a sister. But she’s been adopted. She was given away.’

LL: I was that child that dad was talking about.

DC: You know, I knew I had a sister, a half sister, but there’s no way of finding out how to trace you because they never had records.

LL: My mom had leprosy and as soon as she delivered me, the nurse picked me up and put me in another room.

And there was windows and my mom could see. But she never had the opportunity to touch me.

But when I first seen your face…

DC: So I knew you were my sister.

LL: You just ran to me and gave me the most biggest hug I ever had.

DC: We’d been looking for you for such a long time. So when we finally met, there was relief in my heart.

LL: You know, I’ve known you for almost 20 years brother, and just feeling that love… I can carry you with me for the rest of my life.