Jeffrey Sherman was around 5 years old in 1962 when he came home one day and found his father at home, looking depressed. Jeffrey’s father was the late Robert B. Sherman, one half of the Sherman Brothers, the songwriting duo behind many of Walt Disney’s classic films.

Robert and his brother, Richard, were in the process of writing songs for the Mary Poppins classic film and had a favorite piece called “The Eyes of Love.” Unfortunately, actress Julie Andrews didn’t like the song and Walt Disney had asked them to go back to the drawing board and come back with something more in line with the philosophy of Mary Poppins. The new phrases they tried kept falling flat. The Sherman Brothers were in low spirits.

But the conversation Robert had with 5-year old Jeffrey after he arrived home from school changed that. 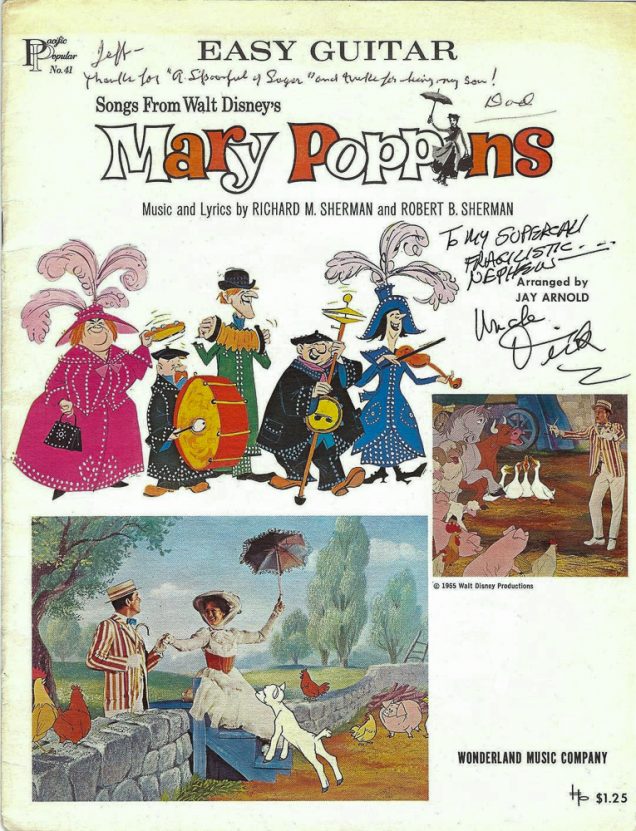 In this remembrance of his father, Jeffrey, who is now 63, recorded for StoryCorps from his home in West Hills, California, where he spoke with his wife Wendy Liebman, 59, about how that day he inadvertently helped spark the creation of one of the most famous songs in the American canon.

Bottom Photo: A Mary Poppins song book from Jeffrey Sherman’s childhood, with special dedication from the Sherman Brothers. Robert Sherman’s dedication reads, “Jeff —Thanks for ‘A Spoonful of Sugar’ and thanks for being my son! Dad.”

Host: This is a story about finding inspiration in unlikely places. Jeffrey Sherman is the son of Robert Sherman, one half of the Sherman Brothers, the songwriting duo behind many of Walt Disney’s classic films.

At StoryCorps, Jeffrey told his wife Wendy about how getting a vaccine as a child sparked the creation of one of the most famous songs in the American canon.

Jeff Sherman (JS): My dad always filtered everything down to its simplest form. People thought maybe he wasn’t listening, but he would always listen. And then he would form his words very carefully. Words were like his religion. He brought Word Builders on my mom and dad’s honeymoon, my mom complained. He wanted to just know words and he loved the sound of words and how they felt on your tongue.

My dad and uncle had a favorite song that they had created for Mary Poppins called “The Eyes of Love.” But Walt Disney said, “Could you write something that’s more in line with the philosophy of Mary Poppins?” and it was all just falling flat. They were both really depressed.

Well, it happened that that day I was at school, I was about six years old, and they were giving us the oral polio vaccine. You know, it wasn’t the shot. So I, you know, stood in line with all my friends and we all just took this thing. And then I got home and my dad looked depressed. And all the shades were closed, it was very dark in the house.

And I said, “Oh, we had the polio vaccine at school today.” And he looked at me, he goes “You let someone give you a shot at school? Did it hurt?” And I said, “No, no, no. They took out this little cup and put a sugar cube in it and then dropped the medicine and you just ate it.” And my dad looked at me and started shaking his head. And he went over to the phone and he called Dick and told him that he had something, and the next day they wrote “a spoonful of sugar helps the medicine go down.”

JS: They had this little recording studio. My uncle usually would play and sometimes my dad would sing backup. And so they would bring home the songs and I would hear all these songs before anybody else. And he played Spoonful of Sugar. And he said, thank you for that song.

I think that the love of his family and each of us kids inspired different things all the time for him. It was kind of like that was his yarn and he could make it into the most beautiful afghan. He could take something mundane like that and see the, the magic in it.