On August 25, 1916, President Woodrow Wilson signed into law the Organic Act of 1916, establishing the National Park Service as a federal agency under the jurisdiction of the Department of the Interior. Today the National Park Service (NPS) maintains 412 areas over 84 million acres, and is a leader in preserving U.S. history and culture—including awe-inspiring natural parks and monuments such as Hot Springs National Park and the Mount Rushmore National Memorial. 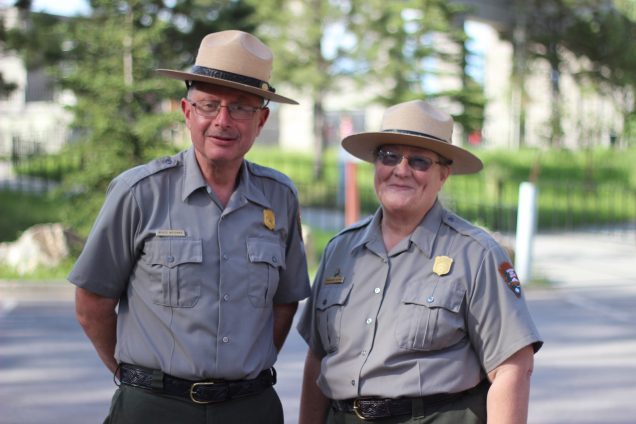 Over the past 15 months, in partnership with the National Park Service Midwest Region Centennial Committee, StoryCorps has visited many of these important sites to document the place-based stories of over 300 NPS staff and visitors. The region oversees a diverse number of sites, and we have spent time at nearly 30 of them attempting to preserve the meaningful connections between the people who work in and visit our national parks and monuments, and the agency dedicated to maintaining and preserving our resources and history.

Stretching from Minnesota to Arkansas, we have visited towering sand dunes on Lake Michigan, a sacred pipestone quarry in Minnesota, and the Illinois home of Abraham Lincoln. StoryCorps facilitators zigzagged across the country, witnessing unique natural formations such as the huge glacial potholes near Saint Croix National Scenic Riverway, and conducted interviews at Pea Ridge National Military Park—home of one of the Civil War’s pivotal battles—while the sound of historic cannon fire went off in the background.

In keeping with one of our overarching missions, the diversity of the sites drew participants from all walks of life allowing us to record the stories and experiences of interpreters, law enforcement officers, local craftsmen, administrators, long-time volunteers, and visitors.

Below is a sampling of some of those stories. 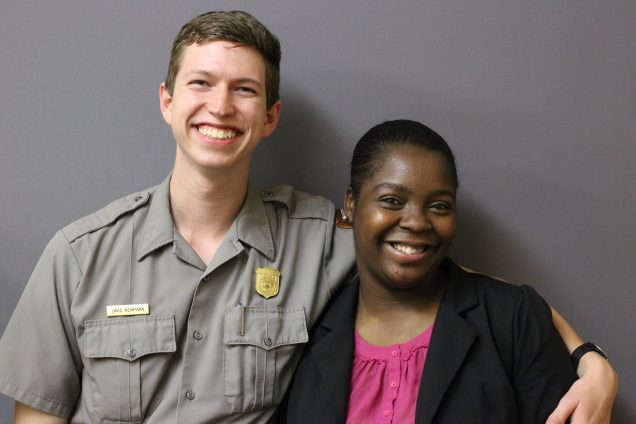 David Newmann first visited the Ulysses S. Grant National Historic Site with his family when he 9 years old. When he was 11, he became the youngest volunteer the site had ever had. Over time he has witnessed the site develop and change describing his work as a “cool dream come true.” With his friend and former coworker, Chiffontae Ross, they discusses the importance of remembering the history not just of the Grants, but also of the enslaved people who worked and lived at the site. StoryCorps visited the site and recorded their conversation in September 2015.

“When I come back I get a feeling of refreshing my freedom…”
For some, visiting a national park site is an opportunity to come home. Founded in 1877 by freed slaves, the town of Nicodemus was once the only all-black community west of the Mississippi and today it remains a functioning town. In 1996, Congress designated Nicodemus a historical site. In August of 2015, StoryCorps joined the annual Nicodemus Homecoming Celebration to record recollections from visitors such as Barbara Christian and her half-brother, Thomas Wellington, who are descendants of the town’s original settlers. They sat down with StoryCorps to remember family gatherings in Nicodemus and their ancestors who founded the town.

“Our job doesn’t have a lot of praise to it, and we don’t really mind that…” 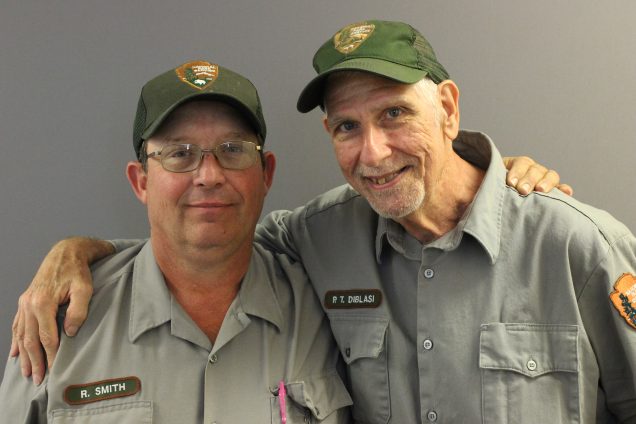 Roger Smith (left) and Terry DiBlasi (right) are tram mechanics at the Gateway Arch. Roger remembers seeing the 630-foot high arch for the first time on a high school trip and being afraid to go up to the top. According to Roger, the “tram is one of a kind, and we are one of a kind.” With more than 2 million visitors a year, the most common question they are asked is, “Will it make it to the top?” It always does and that’s why they have a saying: “If it doesn’t break down and it runs, we’re doing our job.” In September 2015 they sat down with StoryCorps to talk about their roles as veteran mechanics working on the tram that takes visitors up and down.

“I tell people that I’m Smokey Bear without a costume…” 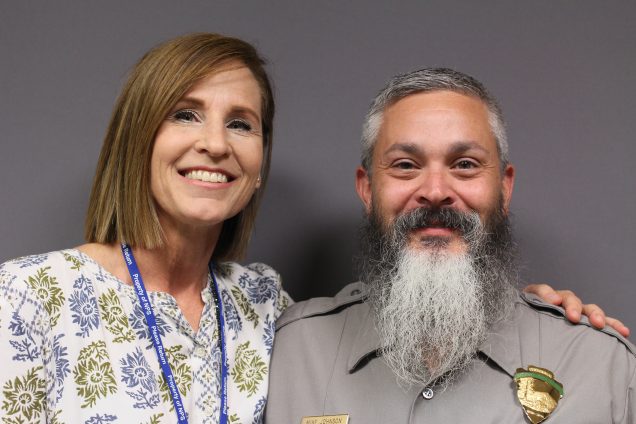 At the National Park Service Midwest Regional Office, J. Michael Johnson talked with his wife, Joyce Van Horne, about his unique role as a wildland firefighter and media relations coordinator for the National Park Service. He describes the grief and sadness that comes with the job and recalls comforting residents of a California neighborhood, whose homes had all been destroyed by fire. He also tells her about the joy he gets from moments of solitude, sitting alone in the parks, listening to the birds and appreciating the vast beauty. They recorded this StoryCorps interview in June 2016.

“We ingrained in you, early on, that this was a special place…”
In unique and individual ways, the National Park Service has changed millions of lives. For Steve Yancho, it redirected his entire career. Steve came to Sleeping Bear Dunes National Lakeshore thinking that he would be there for a short period of time, but ended up staying for over 30 years. Today, he has passed the torch on to his son Sam, who is also a park ranger at Sleeping Bear Dunes.

In the coming months, StoryCorps will travel to Arkansas, North Dakota, Indiana, and Illinois stopping to record at nine more sites; from the Theodore Roosevelt National Park in North Dakota, to the Pullman National Monument on Chicago’s Southside, this growing collection will continue to celebrate significant moments in U.S. history, and preserve the stories of those who keep it alive.