Voices from StoryCorpsU: Amirah – StoryCorps
Support StoryCorps and help preserve the stories of our time in America Donate

“Honestly, I just didn’t know what to do and I felt like a total failure.”

Amirah, a student at Methuen High School in Methuen, Massachusetts, made this StoryCorpsU (SCU) recording during the 2014-2015 school year.* 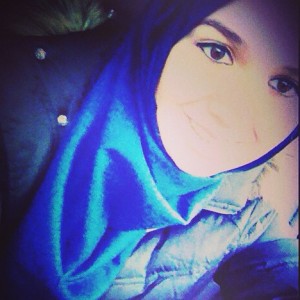 Last year, when I was in the 9th grade, I went through a very difficult time in my life. I have a younger sister who is currently in the 8th grade. But last year when she was in the 7th grade, there was a big issue with her. In middle school she was getting bullied by a lot of her supposed friends and she managed to fall into a severe depression with severe anxiety. She was getting anxiety attacks. She was suicidal. She had to be admitted to the hospital even, which was terrifying. It kind of made me feel like a failure because I felt like I should have known. Because she pretended she was happy but in reality she really wasn’t and she was very close to committing suicide.

So I kind of felt like it was my fault. And I didn’t know what to do. I was scared. I had never ever experienced anything like that before. And when my sister was admitted to the hospital, she was admitted to a ward for people who are at risk for endangering their own lives, and we weren’t allowed to go see her. And I was terrified. My whole family was terrified. And honestly I just didn’t know what to do and I felt like a total failure. She had been cutting herself and just doing these horrible things and the fact that me and my sister—I had thought that we were really, really close and I had no clue what was going on kind of made me feel like I didn’t know her as much as I thought I did.

But one day when we were at home, we got into a little argument because, you know, that’s what sisters do. And so we were fighting, but not like really fighting, it was more like an argument over a stupid, petty thing. And she was upset, and I felt bad. But I was angry, so she locked herself in her room, and I stayed in my room. And I was just all of a sudden concerned because I didn’t know if something I had said could make her do anything that would harm us or anything. I didn’t know what to do. It was one of the scariest experiences that I’d ever been through.

But then later when my dad went up there into her bedroom to get her out, my sister wasn’t in her room. She had somehow gotten out of her room. And I didn’t know where she was, and she had left a scarf hanging from the ceiling fan. And I was like, “Oh my gosh.” And then she had left a note on her bed, sort of like a suicide note. And what she put in the note said that what she was going to do basically was my fault. And I felt like the most horrible person in the world. I cried and I cried and I cried. But thankfully — thank God — she was ok and she didn’t have the courage to, um, do it.

So she was admitted again to the hospital and she got medication and she was starting to feel better and thankfully now things have gotten better at home. She’s more open about herself. She’s not completely better yet, but we’re on our way to that. And this event, it changed me as a person. It made me realize that I have to be careful about what I say and that I can’t just be…. It just made me a better person because it made me realize things that I say and what people say can actually really hurt people. And I hope others can learn from my experience because I would never wish that on the worst person in the world because it was the most terrifying thing in my life.

*This story was recorded at the conclusion of the “Where We’re Going” SCU unit, in response to one or more of the following prompts (which are sourced from the Common Application for Undergraduate Admission Personal Essay Component):