In April 2016, Adama Bah spoke with her “second mom” and friend, Deleen P. Carr, about her experience being forcefully detained as a 16-year-old on suspicion of terrorist activity, and what her life has been like since she was released with no charges. 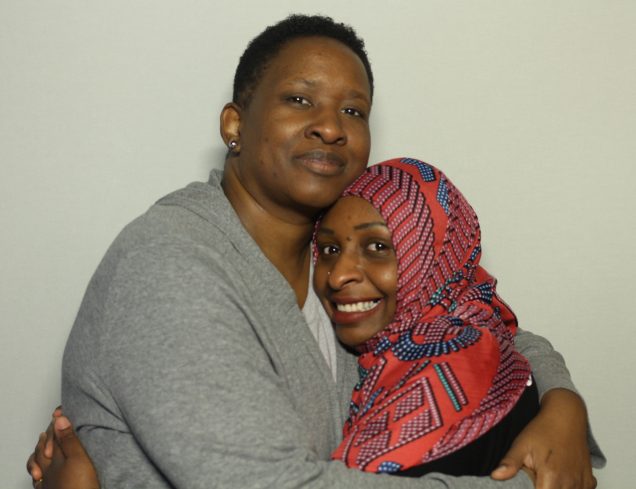 “I was sleeping, and…all I remember is when they came and pulled the blanket off my head. I’m 16, I’m going to pull the blanket back on. It wasn’t time for school because the sunlight wasn’t out. And then you hear noises and voices — ‘Get up! Get up!’ — and they’re not say, ‘Hey, get up, sweetie!’ No, they’re very rude,” Adama says, as she remembers when FBI agents and police came into her family’s home and took her and her father away. She tells Deleen about how confused she felt, and initially told the agents, “You can’t do this to me, I’m an American.” The officers told her that she wasn’t, and that she had no rights.

Deleen recalls a letter that Adama sent to Deleen’s daughter during the six weeks of detainment in which she described her conditions: “…You spoke to the fact that the conditions were horrible, the people were not nice, they were not kind… They just threw clothes at you in not your size, and…you felt like they did that to embarrass you. You were very full-breasted and they made you wear a bra that was three sizes too small. You were describing how you felt under these conditions.”

Adama talks about the way that she and her siblings are still affected by her detainment and how they will continue to be affected for the rest of their lives. “I went through an identity crisis. Am I American? Am I Guinean? What am I? This whole time I thought I was an American; now you’re telling me I’m not. Now I realize I am American. I just have two cultures. That’s why they say Guinean-American. But I’m American. And now you can’t tell me any different, but it took me a while to get there.”