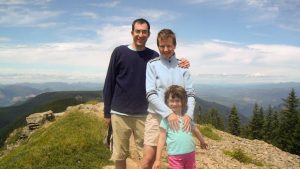 Host: In 2019, Sylvia Grosvold came to StoryCorps with her dad, Josh Weiner, to remember her mom, who died by suicide when Sylvia was a little girl.

Sylvia Grosvold (SG):  I had this whole story about how she lived in a city on the moon. And so I would look out the window and talk to her.

Host: They came back to StoryCorps when Sylvia was 18.  She was off to college, 3,000 miles away, and her dad would be living alone for the first time in his life.

Here Josh remembers suddenly taking on the role of a single parent:

Joshua Weiner (JW): Losing your mom when you were five years old, there was just so much more responsibility on me to take care of you and keep you safe. But now I don’t need to know where you are all the time, or when exactly you’re going to be back, and that’s been hard. And that’ll be hard about you going to college as well.

SG: Yeah, but I’m terrified because the longest I’ve been away from home is two weeks.

JW: Yeah, but you are going your own way, which is beautiful. You know, there’s nothing good about your mom dying, but our relationship is really special because of that.

SG: Yeah, absolutely. We’ve gone through everything together, and we’ve had long conversations about really hard stuff.

JW: Yeah, and that’s something that you have in common with your mother. She was like that, too. When she had things that were bothering her, she had to talk about them. Although a big difference is you do a good job of recognizing that you’re not going to be in that place forever and moving forward in a way that she had trouble with.

JW: Yeah. What is it that you hope for me now that you’re leaving for school?

SG: I mean, you’ve worked really, really hard. As a teacher, you’ve always put your students first and then you were a single parent. So, you deserve some rest and tea on the front porch.

JW: [laughs] Thank you. I mean, ever since you were born, you have been the center of my life. Everything I do kind of revolves around taking care of you and making sure you’re okay and stuff like that.

SG: Yeah. What do you think that first night alone is gonna feel like?

JW: It’s going to be quiet, which I like. But your presence is gonna be absent and that’s going to be like a little hole in my heart, and it’s gonna feel like there’s a part of me that’s missing.

JW: Mhm. But, wherever I am will hopefully still feel like home to you.