Geneva Tisdale was working that day, in 1960, when four young black men sat down at the Woolworth’s lunch counter in Greensboro, NC, and asked to be served. The management refused, and protests ensued. Six months of negotiations and sit-ins later, the Woolworth’s management changed its policy and chose Geneva Tisdale and two of her co-workers to be the first African-Americans to eat at the lunch counter at which they worked. Thirty years later, Geneva Tisdale was still behind the counter. David Isay interviewed her the day it closed.

Recorded in Greensboro, NC. Premiered October 23, 1993, on All Things Considered. 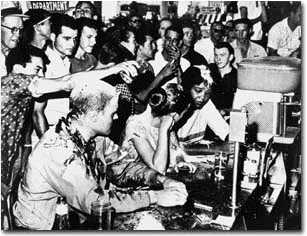 Three students endure taunts as they stage a sit-in at a Woolworth’s lunch counter in Jackson, MS. Copyright 1997 State Historical Society of Wisconsin.

DAVID ISAY: The luncheonette at Woolworth’s in downtown Greensboro takes up the back corner of the store, hemmed in by racks of mops and brooms. A single straight lunch counter runs along one wall, a series of horseshoe-shaped counters along the other. It is lunchtime, and the place is packed. Customers sit shoulder-to-shoulder on swivel chairs. A sign with the day’s special swings from gold chains over the take-out counter: Liver and onions, $2.99. Near this sign, behind a counter, stands a woman at a chopping board. She works quickly — making sandwiches, slicing tomatoes. There is a no-nonsense air about her. She rarely looks up.

GENEVA TISDALE: I put myself in my work, always have.

ISAY: Geneva Tisdale has worked at this lunch counter now for more than four decades. You would not think it looking at her. Geneva Tisdale’s face is smooth. There’s not a hint of gray in her hair.

TISDALE: I started off as a fountain girl.

ISAY: Geneva Tisdale was nineteen years old when the luncheonette manager gave her a job at this counter.

ISAY: Geneva Tisdale was around in the days when African-Americans were allowed to cook, clean, and wash dishes here, but were not allowed to serve food. All of the waitresses and all of the customers were white. There were no signs prohibiting blacks from eating at the lunch counter, she says. Everyone just knew. The policy went unchallenged until February 1st, 1960, when four freshmen from the Agricultural and Technical College of North Carolina sat down at this counter. Geneva Tisdale was working that day.

TISDALE: At first I thought it was — I said it was somebody being funny. I remember passing and I saw them sitting there and I kept walking. But then every time somebody would pass by them, they would ask if they could be served. They wanted — asked for a piece of pie and a cup of coffee. And everybody passed by them — just told them that they couldn’t serve them. So that made me kind of nervous, and I went on back to the back and I stayed back there.

ISAY: At the time, Geneva Tisdale was pregnant with her third child and was sent home to wait out the sit-ins. The protests grew quickly. On the second day, there were twenty-eight students sitting at the counter. On the third, there were sixty, occupying all of the luncheonette seats all day. By the sixth day, there were one thousand demonstrators in this Woolworth’s. The management decided to close the counter down. It reopened two weeks later, still segregated. The students and Woolworth’s negotiated for five months, until the store finally announced in July that there would be a change in policy. Geneva Tisdale says that she and two of her coworkers in the kitchen were chosen to be the first African-Americans to eat at the lunch counter. On July 25th, 1960, Geneva Tisdale was told to come to work in her uniform, but to bring along a change of clothes. It was around noon, she says, that the luncheonette manager came over and told her and her coworkers what to do.

TISDALE: She said, ”Now you all go out, get dressed, walk around in the store like you’re a customer — shopping.” She said, ”Have your big bag and all.” She said, ”Walk around like you’re shopping and then come over to the counter,” and she told us where to sit — so we all did. She said, ”Now, if you don’t want your pictures in the paper, order something that you can eat real quick, ’cause when the word gets out,” she said, ” the newspaper people will be in here.” I ordered a egg-salad sandwich, and I swallowed it. (Laughs.) It took me about five minutes, I’m sure — no longer, no more than ten. And when we finished, we got up and left and she said, ”Go back upstairs, change back into your uniform, come back down and go to work and let’s see what happens.” So we done that. And sure enough it wasn’t long before the photographer and all was in — people started crowding in. And they didn’t know it was us. (Laughs.) (Sighs.) We were the first.

ISAY: That was more than thirty years ago, and Geneva Tisdale says that she has not had a meal at this Woolworth’s counter since then. It was her wish to one day retire and come back with her grandchildren to eat.

TISDALE: Just sit at the counter and be served. (Laughs.) That’s what I was hoping for.

ISAY: But early last week, the store manager informed her that the Woolworth’s lunch counter would be closing today. Geneva Tisdale says that she is still in shock. She will miss working here, but she knows that her job is far from perfect. After more than forty-two continuous years of hard work behind this counter, after more that forty-two years of dedicated service to the F.W. Woolworth Company, her hourly wage:

ISAY: This salary, Geneva Tisdale says, speaks to what has not changed since four young men occupied this historic lunch counter, in a watershed moment of the Civil Rights Movement, thirty-three years ago.

TISDALE: I feel like, sometimes, if a white person had this job, that person would get paid more than me. Just because of the color of their skin.

ISAY: The Woolworth’s lunch counter in Greensboro, North Carolina, closed down this afternoon. On Monday, Geneva Tisdale will be moved out onto the floor of the store and will work there until it closes in early January. For National Public Radio, I’m David Isay.