You may recall the voice of Dr. William Lynn Weaver from a StoryCorps interview he did back in 2007, where he talked about his father, Ted Weaver — the most important man in his life.

He later came back to StoryCorps to remember someone else who had a huge influence on him: his 7th grade science teacher, Mr. Edward O. Hill. 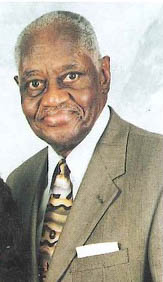 In the fall of 1964, Weaver was 14 years old and about to start his sophomore year of high school in Knoxville, Tennessee, when, along with 13 other black students, he integrated previously all-white West High School.

At StoryCorps, he talks about what happened on his first day at West High.

WLW: As soon as we got into the school, the principal was calling the roll. He said, ’Bill Weaver,’ and I said, ’My name is William.’ And he said, ’Oh, you’re a smart n-word.’ I’d been in school maybe thirty minutes and he suspended me.

I don’t remember a day that a teacher did not tell me that I didn’t belong. We’d have a test and they’d stand over me and then just snatch the paper out from under and say, ’Time’s up.’

The first report card I got all Fs, including Phys Ed. So I’ve gone from being a good student to starting to think, ’Well, maybe I don’t belong. Maybe I am dumb.’

I was home one evening wondering what I’m going to do when there’s a knock on the door, and it’s my seventh grade science teacher from the black school, Mr. Hill. He said, ’You know, I understand that you’re having some trouble.’ And I said, ’Yeah, Mr. Hill. I think they’re trying to run me away.’ And he said, ’What I need you to do is to come back to the junior high school after school, every day and Saturday mornings.’ He said, ’Can you do that?’ I said, ’Yes Sir.’

And so every day waiting for me would be Mr. Hill with assorted other teachers — the English teacher, the math teacher — and they tutored me. And once I got past those Fs [laughs], I stopped doubting myself. But learning became almost a spiteful activity to prove the teachers at the high school wrong. And no matter what I did academically or athletically, I was never recognized at that school.

I never had a conversation with a counselor about going to college, but during my senior year, I got a letter saying, ’You’ve been awarded a scholarship.’ So I end up going to Howard University.

And 37 years after I left high school, I’m at my older brother’s funeral, talking to Mr. Hill. And I said, ’You know, Mr. Hill, if I had not gotten that scholarship, I don’t know what would have happened.’ And I don’t know how I got the scholarship because I never even applied for it. And he said, ’I know, because I filled in the application and sent it off for you.’

So Mr. Hill stepped in and, I believe, saved my life. And, at the time, I didn’t realize how much I was being helped. And that’s the ignorance of youth and the wisdom of age when you look back on it you say, ’How did I get here? How did I make it?’ Because people helped you, whether you knew it or not.