Abe and Esther Schuster grew up children of Holocaust survivors. Their father, Judel, lost his parents and sister in the Sarny ghetto. Pauline, their mother, lost her entire family — they were murdered during the Nazi occupation of Uman, then part of the Soviet Union.

Pauline and Judel met in Stalingrad and married there in 1945, shortly before they entered a displaced persons camp in Italy. Four years later, they left Europe and arrived by boat in New York to begin a new life. 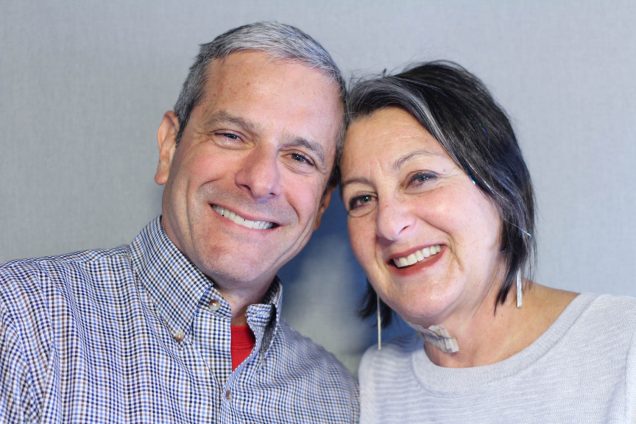 At StoryCorps, Abe and Esther sat down to remember their parents’ philosophy of life. And as Abe’s high school math teacher would learn, that didn’t always mean following the rules.

Top photo: Pauline and Judel Schuster on their wedding day in Stalingrad, April 1945. Courtesy of Esther and Abe Schuster.

Abe Schuster (AS): Dad said, ‘So, Mrs. Dinwoodie, how is mine Abey doing in the math class?’

And she said ‘Well, he sleeps a lot in class, he stares out the window, he doesn’t do his homework, and he doesn’t seem to paying attention very well.’

And Dad said, ‘You know, Mrs. Dinwoodie, you should be ashamed of yourself. My Abey has jobs, he works after school, he knows a lot of friends and has fun in the evenings, so of course he’s going to be sleepy. And probably you are boring him.’

Esther Schuster (ES): We could do no wrong in their eyes. You know, I would be upset cause I’d get an 89. And they’d go ‘89, that’s wonderful, you did the best you could.’ The other thing would always say to us was, ‘The only thing that’s important is you learn how to do something that you can make a living at.’ Because really, they knew that that was survival.

When did you first realize that we were kids of Holocaust survivors?

AS: I knew they were from Europe. I knew they’d lost their family. But I  think the first time, Esther, I really figured it out was in 8th grade.

You know, in history class, we saw these movies, these Holocaust horror movies. And I think that’s the first time I actually realized what happened to our grandparents, and aunts and uncles.

ES: Part of it was even just our names. We knew we were named after people who died too soon who there was a lot of pain about. You know, like, Mom always used to say, ‘You’re my mother, you’re my mother, and I’m so glad to have you cause you’re my mother.’ I think that we had this vision of life and death that was maybe different from other kids our age. But they also taught us the pleasure in small things.

AS: They never were kids, they never played, so sometimes you can make up for things later.

ES: I remember when we would go to Crystal Beach and there was that little store on the corner. And we would stop; we would get an orange soda.

ES: And, you know, mom, you would’ve thought somebody bought her a diamond ring.

AS: And all the neighborhood kids would go to the pool and swim in the summer and, dad went with me.

AS: And he climbed up and he went down the slide. And everybody’s looking at him and I’m like ‘Yeah, that’s my dad. Whatever.’ But, that’s how he was, he was like a kid.

ES: We were lucky. We were very lucky to have them as parents — despite their suffering, despite their pain. They were able to teach those lessons of live now, love hard, and appreciate everything.