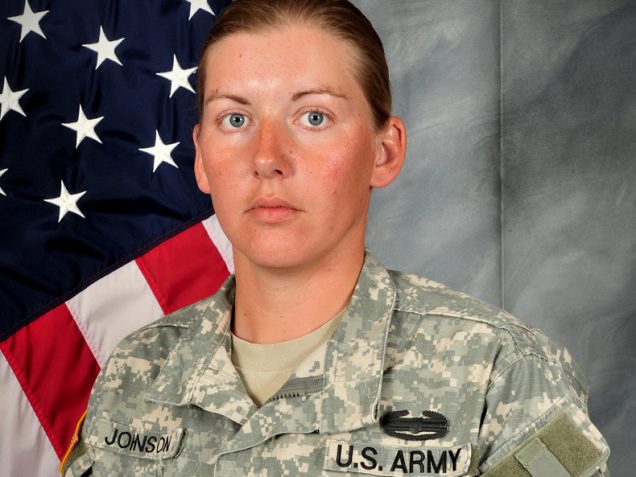 TJ: That day, I had a bad feeling. I immediately started scouring the news websites, and it said that there were three US soldiers killed in Khost, Afghanistan, and I knew obviously that’s where she was stationed.

SJ: So how did you get notified?

TJ: I knew that any communication about Donna was gonna come to you guys, because, even though we were married, I wasn’t considered her next of kin. So Donna’s sister called me and told me that the military people were there. So I grabbed a copy of our marriage certificate. I went to your place, and I said, ”You know, I’m her… her wife. And I brought documentation.” The Notification Officer looks at it, and then he looks at me, and he looks at it again and he goes, ”Can I have a copy of this?”

And when a soldier’s fallen, they usually have a military escort that brings them home. And I said, ”Can I do it, because I’m military?” He goes, ”Well, We’ll see.” But I know it wouldn’t have happened if it wasn’t for your insistence.

TJ: I was flown up to Dover to see her brought back on American soil. And honestly, I can’t tell you how great of an honor it is to escort a fallen hero home, but then when that hero is your wife, it means a lot more.

And uh, I was given all her awards, and all her personal documents that I had to turn over to you. And one of the hardest things for me was our wedding ring. I actually slept with it that night. I put her ring on with mine because I thought it was going to be the last time I was going to get to see it.

SJ: Wow. I gave you your ring back. I thought that was only natural. Because I don’t know how the Army or any military does it, I just know what’s fair is fair.

TJ: You know, I’m so thankful for everything you’ve done. You allowed me to be named as a spouse in the obituary. Being given a flag in a private ceremony before the funeral, being given a second copy of all her awards, being allowed to sit in the front pew, and pretty much being treated as family the entire time, cause in reality…

SJ: In reality, you married my daughter and that was it.

TJ: But if anybody else were in my shoes, they could’ve been completely shut out and not had anything. So I understand how blessed I am to be a part of your family.

SJ: Well, I want you to know that I’m very proud of you. I consider you mine, because Donna considered you hers. And I wouldn’t have it any other way.