As a kid, Camaran Henson would stay up late listening to his grandfather, Leonard Simmons, tell stories about his experiences as police officer in Newark, New Jersey. 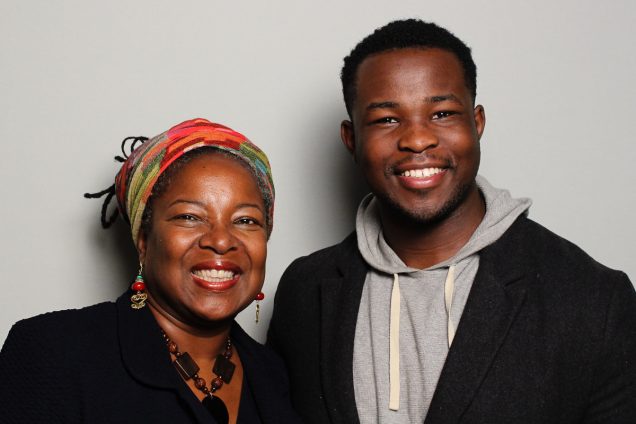 Leonard worked undercover for “The Bandit Squad” — a group of detectives who investigated armed robberies in the 1970s — and Camaran was convinced that his grandfather was a real-life superhero. Camaran’s mom, Toni, knows the feeling because she grew up hearing these tales as well.

Leonard died in 2013, but Toni and Camaran came to StoryCorps to pass his stories on — since long conversations are something of a family tradition.

TH: Dad was working in a factory and he would get off work really late, past when the busses would run. So, he would have to walk back home through Hillside. Hillside was majority white and the cops used to stop him. They would always ask the same question, “Where you going? Where you coming from?” And that would make him angry. And I remember him saying, “One day, I’m going to own one of these houses in Hillside.” So, he joined the police force and that was where I grew up.

CH: I remember, I really truly believed that Grandpa was bulletproof. Like, my grandpa is an actual superhero and could probably fly.

CH: Did you ever worry about Grandpa being a police officer?

TH: I never worried. You know, he loved catching the bad guy. But, one time, street informants told him there was going to be a robbery of a bar. So, he and his partner walked in and he actually was shot at, and shot the perpetrator. That was the only time that he killed a man. And he was hailed a hero. But I think he felt as though he failed. I remember hearing him weeping at night because he had taken someone’s life. That’s why he was such a good cop. He looked people in the eye and he saw them.

CH: What would you say grandpa was most proud of?

TH: His kids. [Laughs] He loved you, you know, first-born grandson.

CH: When grandpa came to visit, I would put on my Timberlands just to make sure that he knew that I was getting taller.

CH: And Saturday mornings, he would take me to IHOP. One particular time, one of the ladies next to me looked at me and picked her purse up and put it on the other side of her. And Grandpa said, “You don’t have to move your purse. My grandson ain’t never stole nothing before in his life.”

CH: And that meant the world to me. I still haven’t completely gotten over his passing.

TH: I want you, Camaran, to know how much Grandpa loved you. But I don’t want you to ever feel like you’re off the hook. The legacy that you leave, is the one that honors him.

CH: Absolutely. I try to be just like him. And I want him to continue to be proud of me.