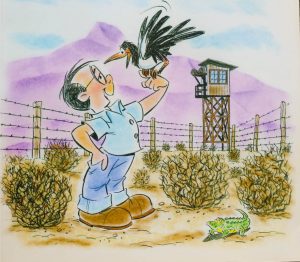 SY: This little baby bird was begging for food. And an older boy said to me, ’That bird’s going to die.’ So I decided to adopt that magpie, which I called Maggie.

My stepfather made a cage and every time I left or returned, I would say, ‘Hello Maggie,’ and she repeated, ‘Hello Maggie.’ And if somebody would laugh, she could imitate the exact laughter; which meant kids, seniors — you name it — all came to see her.

During the summer, we allowed Maggie to go out and roam between the barracks and she was like a social worker; she was so compassionate with the internees. I don’t think she realized she was a bird.

Eventually we knew that the war was going to end but our family did not leave, not ‘till the next-to-the-last train. And Heart Mountain became a ghost town. But I was fortunate; Maggie and I would talk for hours.

Well, two weeks before we left, Maggie was on the bottom of the cage with just her eyes flickering, and early in the morning she died. So I dug a hole; placed her favorite toys, put my old t-shirt on Maggie and buried her, made a cross.

Maggie was like an internee. She was forced into Heart Mountain, just like we were. And even to this day, her legacy still stands. That little bird kept the spirits up for all the internees and, when she was no longer needed, she went to heaven.