On June 24, 1973, a fire tore through the Upstairs Lounge, a gay bar in New Orleans’ French Quarter. Thirty-two people were killed in the blaze and many more injured. To this day, it remains the deadliest fire in New Orleans history and until the killings on June 12 at Pulse nightclub in Orlando, Florida, this act of arson was believed to be the largest single mass killing of gay people in U.S. history.

Unlike in Orlando where there has been an outpouring of support for the victims, following the Upstairs Lounge fire, there was overwhelming silence from politicians, religious leaders, and the local community. 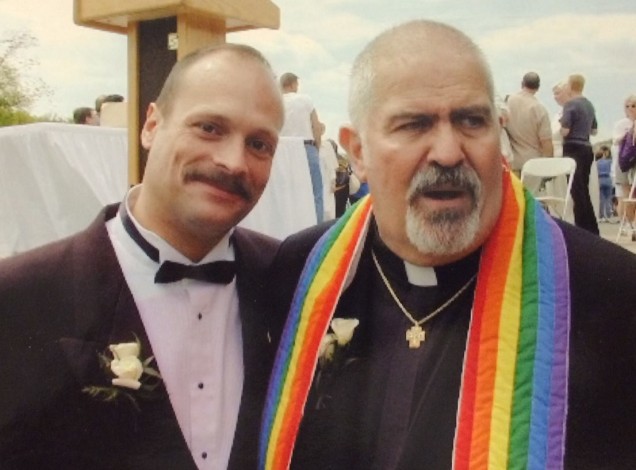 And while police conducted an investigation, no one was ever arrested for the murders.

After hearing about the tragedy, Rev. Troy Perry (pictured at left with his partner Phillip “Buddy” De Blieck in June 1970, at the first LGBT Pride Parade in Los Angeles), founder of the Metropolitan Community Church, a national Christian denomination dedicated to serving gays and lesbians, flew from his home in California to New Orleans to provide support.

Offering comfort and assistance to the victims in hospitals, Rev. Perry recalls speaking with one badly burned man who told him that the school he taught at had fired him after learning that he was present at the Upstairs Lounge. That man died the next day.

Not wanting to return home until he held a service, Rev. Perry remembers the difficult time he had finding a church willing to act as a host. Eventually, the St. Mark’s United Methodist Church in the French Quarter opened its doors and mourners came to fill it. When the service ended, cameras outside confronted attendees and Rev. Perry offered them a way out the back. But in a show of strength, pride, and courage, “Nobody left by the backdoor. And that’s the legacy. We never ran away.”

The initial reaction to the fire is something that New Orleans has had to come to terms with in the ensuing years. In 1998, a plaque was placed on the spot where the Upstairs Lounge once stood to mark 25 years since the fire, and in a Time Magazine piece on the 40th anniversary of the blaze, the Roman Catholic Archdiocese of New Orleans apologized for its silence.

Rev. Perry came to StoryCorps to recall what he saw upon his arrival in New Orleans.

Top Photo: Inside of the Upstairs Lounge on June 25, 1973. Associated Press/Jack Thornell.

TP: When we got to New Orleans, we heard the stories. Buddy Rasmussen, the bartender, got everybody out, and he was the real hero of the fire. But Buddy lost his partner.

I remember going to the hospitals. One of them, school teacher, burned so badly… he said, “Well, the school board just called me to tell me I’m fired from my job.” He’d gotten the phone call while he’s laying in the burn unit. He said, “Can you help me find a job?”

So I said, “I’m not going anywhere until I hold a service for these people.” But “I’m trying to find a church.” I called denominations and asked them. People laughed in my face, people hung up on me. But somebody said, “There’s a Methodist church here, you may want to talk to.” And so, immediately I called the pastor and he said, “You have my permission.” We had no idea if anybody would show up. But you know something, they did. They completely filled that Methodist church — standing room only.

And then I had to tell them, “There are cameras set up across the street. I’ve just found out. But there’s a way you can get out of here, and that’s to walk down this hallway and there’s a door that’ll take you out into the alley. But nobody left by the backdoor. And that’s the legacy. We never ran away.