Before the term “Holocaust” was part of our vocabulary, a radio show presented by the Mutual Broadcasting Company featured a survivor of Nazi terror telling his story. The program, Reunion, was sponsored by the United Service for New Americans, a Jewish philanthropic organization aimed at reforming the 1924 anti-immigration laws that continued to keep Jews and other Eastern Europeans from the safe haven of America. By masking its grave mission in the guise of popular entertainment, the organization struck the only blow it could against the Fourth Estate’s stonewalling of Third Reich abominations.

The format of Reunion, like the popular radio series Queen for a Day, was to bring together, live on the air, people whose reconnections would hit home with listeners. On July 6, 1947, those connections were diverse: a Sgt. Miles Riley was reunited with his wife; one Bill Clemis of Albany, N.Y., came face-to-face with a childhood friend from India; Ezra (“Henry Aldrich”) Stone planned a reunion party for his class from the School of Dramatic Arts in New York; and — in a story unlike anything heard on radio before or since — the Holocaust survivor Siegbert Freiberg was reunited with his beloved father. 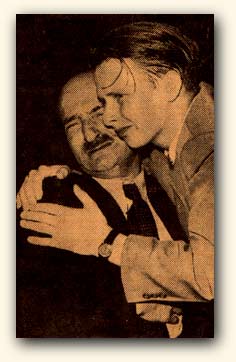 Max and Siegbert Freiberg embrace during their on-air reunion, July 6, 1947. 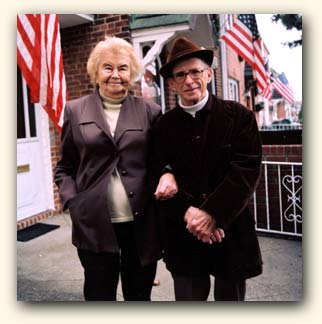 Siegbert and Herta Freiberg outside their home in Middle Village, Queens. 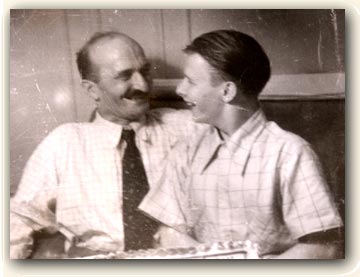 Max and Siegbert a few hours after their reunion. 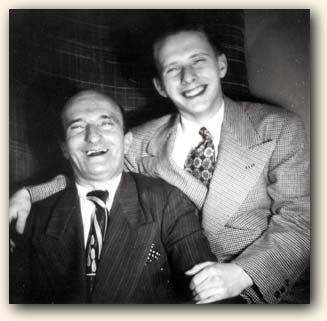 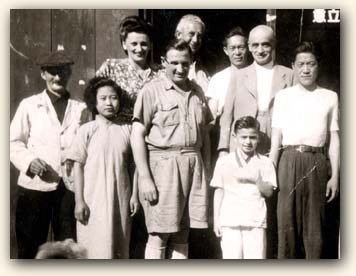 Max Freiberg (with cap on far left) is pictured in Shanghai, where he found refuge during the war after his wife’s relentless efforts won his release from Buchenwald, circa 1946. 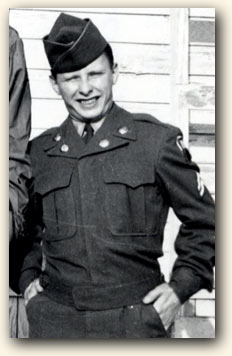 In 1950, Siegbert was drafted into the Army to serve in Korea. 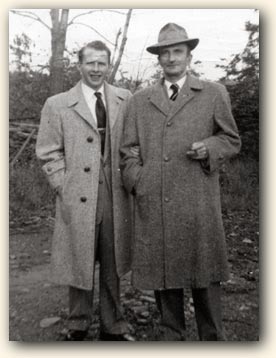 This is the last time Siegbert was photographed with his father. The two were visiting friends near Spring Valley, N.Y., in November 1954. 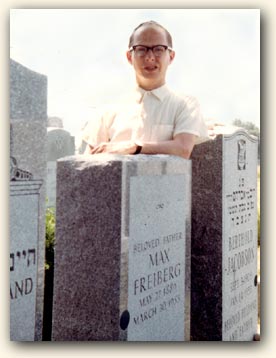 Siegbert Freiberg at his father’s grave.

Other Radio Broadcasts about the Holocaust

During the Second World War, the American mainstream press did not cover the mass slaughter of Europe’s Jews. As early as 1933 the columnist and commentator Walter Winchell condemned Nazi activities, only to be squelched by the notoriously anti-Semitic William Randolph Hearst. Reports on the roundup of civilians were occasionally published. And it was no secret that Jews were chief among those targeted. But Hitler’s plan to systematically exterminate all Jews under his power was simply never reported.

To be sure, that failure can be attributed to the Third Reich’s success at maintaining a shroud of secrecy around its most abominable acts. And when rumors of mass executions, human slaughterhouses, and depraved scientific experiments did emerge, most people found them impossible to believe.

But it is now clear that by early 1942 the United States government was aware of the ongoing industrial murder of Jews and suppressed that knowledge. The war was not going well for the Allies, and the last thing the U.S. Office of War Information wanted to foster was the perception that World War Two was being fought to save Jews.

The American public at large first learned of the depths of the Holocaust on April 16, 1945, when, in the closing days of the war, Edward R. Murrow described the scene at the just-liberated concentration camp Buchenwald. But several earlier radio broadcasts discovered by Yiddish radio historian Henry Sapoznik provided stark imagery of the fate of Jews living across the Atlantic. One such broadcast is the May 7, 1941, “Cable from Lisbon,” written by and featuring Edna Ferber and George S. Kaufman. Funded by the Joint Distribution Committee a Jewish refugee relief agency, the dramatization depicted the fate of Jews in a French town under German occupation.

Another is a speech by Solomon Mikhoels, director of the Moscow Yiddish Art Theater and co-chair of the Jewish Anti-Fascist Committee, the Soviet agency that sponsored his 1943 lecture series in America. Mikhoels’ graphic accounts of German atrocities — including the famed but ultimately unproven allusions to soap made from victims’ bodies — had strong and lasting repercussions.

After the war, Jewish relief agencies like the United Jewish Appeal sponsored English-language radio dramas including “My Town” and “Little Old Man,” which documented the difficulties of Holocaust survivors in America and their new unwary hosts. In them, as in the July 6, 1947, Reunion broadcast, we can witness America’s early attempts to come to terms with one of history’s greatest tragedies.