In 2014, we heard a conversation between Paul Braun, a sergeant in the Minnesota National Guard, and the interpreter he served with in Iraq, who goes by the name Philip — a moniker bestowed on him by American soldiers because he favored Philip Morris cigarettes.

In Iraq, former interpreters’ lives are in constant danger because of their association with American soldiers. So Braun helped sponsor Philip’s immigration to the U.S., and at the time of their interview, they were living together in Minneapolis.

But Philip had to leave his wife and four children behind in Iraq. He spent three years attempting to obtain visas for them so they could join him in Minnesota, even putting his life at risk by traveling back to Iraq in 2014.

Finally, in October 2016, the visas came through, and now Philip’s family — including his nephew, Andy, who was also an interpreter — are adjusting to life in the U.S. Two months after his family’s arrival, Philip came back to StoryCorps to give Andy some advice on adjusting to his new home. 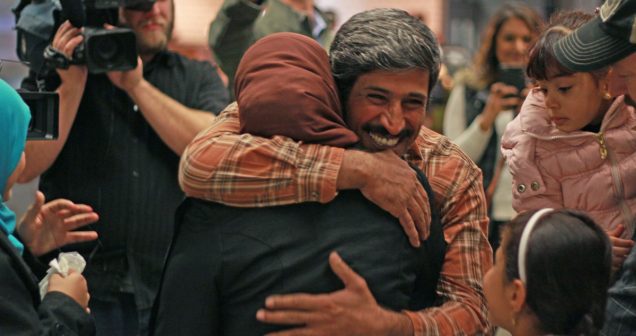 You can learn more about Philip’s story in the 2015 documentary The Interpreter.

Bottom photo: Philip with his wife, Ghania, the day she arrived in Minneapolis. Photo by Sameer Saadi.

Philip (P): You know, I still remember the date and the time when the embassy emailed me saying, ’Congratulations, your family can come any minute now. We have the visa.’ I was like, shocked.

Andy (A): What were your feeling when you first saw me in the airport?

P: Oh my God, I was like, all of a sudden I start clapping and jumping, saying ‘ahlan wa-sahlan’ — ‘welcome, I’m so happy to see you.’

A: You’ve been here for three years. What was the hardest thing to adjust to in the U.S.?

P: As immigrant who come from completely different culture, you’ll see the people here, like, most of them are nicely, friendly and they respect your religion, your background.

P: But, you know, I work as a caregiver in a senior home. So one day, one of my residents he start calling me racist names. But we start talking and one year later he said, ‘I’m sorry. Philip, you changed my mind.’

A: What do you hope for you and your family in the future?

P: You know, when I remember my last couple years, like working by myself here — I used to work like four different jobs — and at the end of the day, go home, there is no one waiting for you.

P: So from being alone to a whole family with my best friend and nephew with me.