Beatrice Perron and Otis Wade remember Mandred Henry, her grandfather and his best friend, who left behind a “legacy of love.” 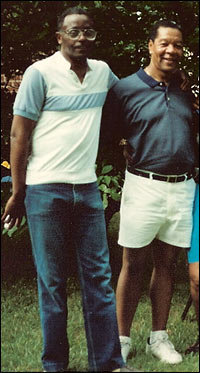 OW: Even as a young kid he was very direct and kind of forceful. One day, we were oh around about seven years old, Mandred walked up to me and grabbed me by the shoulders and said, ’You know what you are? you my best friend in the whole wide world.’ I said, ’Okay.’ He was my best friend in the whole wide world but oh did we have a lot of arguments. We just used to argue for argument’s sake. It was like entertainment, between the two of us, y’know? Mandred never had a brother and I never had a brother, and we adopted one another. Mandred and I, on a couple of occasions, took our mothers out for mother’s day and that was such a special occasion, with our mothers together and the two of us together. I don’t know if you can get any closer than that. Y’know, I remember one day, his mother, I was talking to her and she said, ’Y’know Mandred and you are very good friends.’ I said, ’Yes, we are.’ and she said, ’Y’know what, you two look out for one another.’ And we have been every since. The last time I spoke to him, he was really ailing, he was really sick. And he said, ’If I come home will you come and see me?’ I said, ’No, no, no, not if you come home. When you come home, I will be up there to see you.’ Well he did come home and I’m here.

BP: Um within the last couple weeks he was really worried about how Otis was going to take his death.

BP: What will you miss most about him?

BP: What would you say his legacy is?

OW: A legacy of love. Not too long ago, he said,’ Otis, so many people are calling me now that I’m sick and they’re expressing their concern and love for me.’ He said, ’I didn’t know so many people loved me.’ I said, ’ even more than that love you, Mandred.’ And, he’ll stay with me, he’ll live with me. My best friend in the whole wide world.