Hoping to meet someone special, in 2010 Seth Smiley decided to give online dating a try. Soon after posting his profile, Octavius Humphries reached out to him and they began an email correspondence. 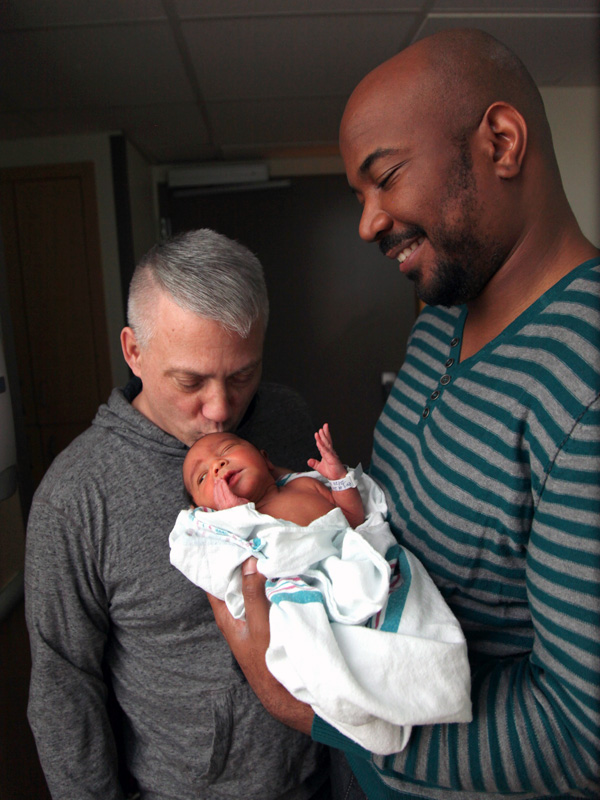 Despite their age difference—Seth is 19 years older than Octavius—they immediately hit it off, bonding over their shared search for “commitment, consistency, and (a) connection.”

Eventually they met in person, going on their first date on Christmas Eve. Unsure of Octavius’ plans for the holiday, Seth invited him to dinner the next night at his family’s Atlanta home. Octavius, who was still grieving the deaths of his parents, had, unbeknownst to Seth, planned on spending the holiday alone. Instead, he reluctantly accepted Seth’s invitation.

At StoryCorps, Octavius (above left) and Seth (above right), along with Seth’s mother, Carole Smiley, sat down to remember their first Christmas together, as well as a more recent memorable holiday event.

Above photo: Seth, Octavius, and their son Julian (photo courtesy of the Smiley-Humphries family).

OSH: We had a amazing first date and then you said, “So, I’ve told my mother that you’d be coming for Christmas dinner.”

SSH: I just thought, nobody really should be alone on Christmas.

OSH: Me being black and you being white and the age difference I thought that this was just going to be a recipe for disaster.

CS: But the minute you walked in the door you just lit up the house and I felt, “Maybe this is Mr. Right.” And I think that I kissed you.

SSH: You didn’t just kiss him, you kissed him on the lips —

OSH: On the lips.

OSH: As shocking as it was I knew I was home. You know when I was 22 I lost my father and two years following that my mother passed away. And so Christmas and the holidays was just a constant reminder that they were missing. But when I met you and you invited me into your home it gave me that sense of family again instantly.

CS: Is that why you chose to propose to Seth at Christmas?

OSH: Yeah, it was our third anniversary.

We’re sitting there at dinner. I remember starting with, “I just want to share with you how special this is for me.” Everyone stopped eating because they were hip to what was about to happen. Except for Seth.

SSH: I was like, “Oh my God, here we go again.” ‘Cause you’re such an emotional person. I was like, “Ah jeez I gotta listen to this.”

OSH: And so Seth just continued —

OSH: — shoveling food down his throat.

SSH: And then I realized it was a proposal.

CS: I was so happy. It was awesome.

SSH: You know, having come out in 1983 in Atlanta, Georgia — never would of — Always wanted to get married, always wanted to have a family. But today, it’s a reality with you.