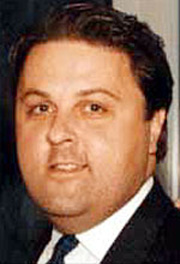 Tommy Sullivan (left), was a stockbroker who was a partner at Harvey Young Yurman. He got his start at 13 working with his father at a discount brokerage firm. Tommy was killed in the World Trade Center attacks on September 11, 2001.

Tommy’s mother, Arlene Sullivan (pictured above right), came to StoryCorps with her daughter Norene Schneider (pictured above left) to remember her son. Here she recalls a precocious Tommy in his youth.

Photo courtesy of the Sullivan family

AS: He was always very smart, very bright boy. When he was five, we went into a candy store one day and the man had a sign: ’Pretzels – 2 cents each or 2 for 5 cents.’ And he said to the man, ”That sign’s not right, mister.” He said, ”It’s 2 cents each or 3 for 5 cents.” So the man said, ”My sign’s not wrong.” And Tommy said, ”Well then I want one for 2 cents and another one for 2 cents.” He didn’t wanna give him that extra penny. So maybe–maybe he was cut out for finance even at that age.

AS: But I think the big thing was with Tommy was his first summer job when he was 13. Dad worked for the first discount brokerage house, and the broker said ”We need somebody to come take lunch orders for us.” And that person turned out to be Tommy. And the brokers used to say, ”My gosh, this kid takes these lunch orders. The secretaries don’t even get it right. He’s only a kid and he gets the lunch orders correct. There’s never a mistake.” And the brokers, from that summer on, always called him ”The Kid.”

NS: They still call him–

AS: Even after he’s married and he had two children, all the brokers used to say to Dad, ”How’s the kid doin’?” And they still refer to him as ”The Kid.”