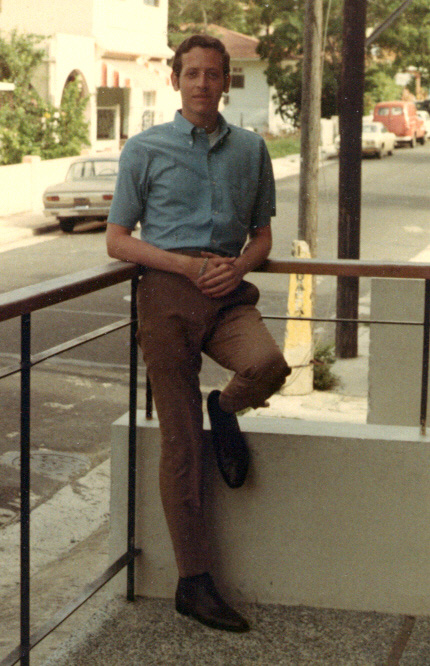 In the early morning hours of June 28, 1969, in New York City’s Greenwich Village, police raided the Stonewall Inn. What followed was a series of demonstrations and protests—sometimes violent—by members of the LGBT community.

Considered to be the birthplace of the modern gay rights movement in the United States, the Stonewall Uprising played a significant role in beginning the process of unifying and organizing activists fighting for LGBT rights.

One of the patrons in the bar at the time of the raid was Michael Levine (above right). He was there on a date drinking and dancing when the “lights went up, the music went off and you could hear a pin drop.”

Michael came to StoryCorps with his friend Matthew Merlin (above left) to recall the night of the Stonewall Uprisings and how it changed him as a person and his outlook on the world.

ML: It was a Friday night and I had a date. I was at the bar getting drinks for both of us. We had just finished dancing.  The music was blaring.  It was a combination of beer and cigarettes and cologne.

Suddenly as I’m handing money to the bartender a deafening silence occurred.  The lights went up, the music went off and you could hear a pin drop, literally.

My boyfriend rushed in from the dance floor.  He walked over and said, ”Put the drinks down.  Let’s leave.”

We walked out onto Christopher Street and there are what look like 100 police cars facing the entrance and crowds of people looking at us.  The kids coming out of the Stonewall, the onlookers, the police, everyone was just kind of standing there.  It was not a riot in the sense of people breaking furniture and police hitting people over the head.  It was just an enormous crowd of people.

And then the police started to say, ”OK everyone, leave,” and the drag queens, they’re the ones who said to the police, ”We’re not leaving.”  And they formed a chorus line outside of the bar.  And they stood there dancing in the street.  They were all Puerto Rican drag queens and Irish cops.  It was a funny, funny confrontation.

The police would disperse the group and then they would reform half a block away and dance back toward the Stonewall.

When we came back on Saturday night, we stood there on the street and held hands and kissed, something we would never have done three days earlier. It made me feel wonderful.  I stood there with chills.  It was like when you’re at a parade and the flag goes by and you know, you see something you’re so proud of, and you see your troops and you get that chill inside of you.  I got a chill.  I got a chill standing on the street and seeing guys holding hands and kissing and in the week that followed, I got phone calls from relatives, cousins, my brother, my aunt.  ”We’re just calling to find out if you’re OK.  We know you go to places like this.  We want to make sure you’re alright.”

That means, they knew all along.  It was like I was wearing a sign on my back.  They knew.  We never discussed it. I never once had to say to anyone in my family, ”I’m gay.”

MM: How did you feel about yourself between the beginning of Stonewall and after Stonewall.  Did you feel that you were a different person?

ML: No, I didn’t feel like that I was a different person.  I was the same me.  I was a homosexual person, working for the city of New York, coming from an old-fashioned Jewish neighborhood, a loving family, living in Greenwich Village on my own.  I felt the same.  I felt comfortable.  But I felt the world, now, is more comfortable with me.