In the summer of 2010, following her junior year of high school, Emma McMahon left her home in Tucson, Arizona, and traveled to Washington, D.C., to work as a page for her local Congresswoman, U.S. Representative Gabrielle Giffords.

Following her internship, she returned home to her family, but without one important memento from her summer—a photo of herself with the congresswoman.

Looking to rectify the situation, her mother, Mary Reed, learned months later that Rep. Giffords would be holding a constituent meet-and-greet in the parking lot of an area shopping center and made plans for her family to attend and finally get that coveted photo.

That was the day, January 8, 2011, that Jared Lee Loughner opened fire on a crowd outside of the Safeway critically wounding Gabby Giffords and shooting 18 others—six of whom were killed.

Mary, one of those who were shot that day, came to StoryCorps with Emma to remember the day she shielded her daughter from a gunman. 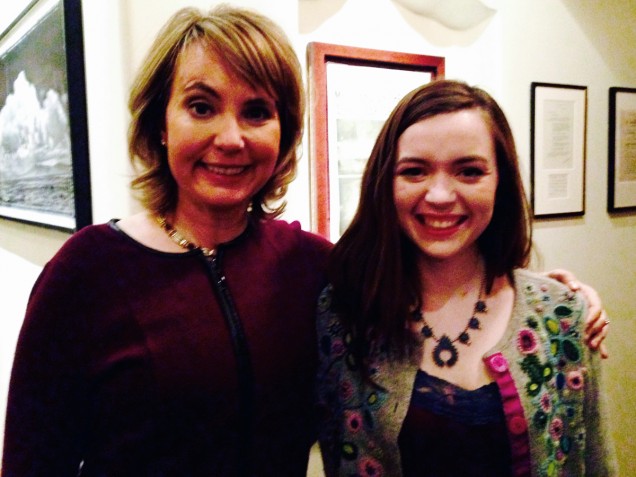 Above photo: Former Arizona Rep. Gabrielle Giffords and Emma McMahon at a dinner for survivors of the 2011 shooting held at the Giffords home on January 8, 2014 (courtesy of Emma McMahon).

Top photo: Mary Reed and Emma McMahon, this month, in the parking lot of the Casas Adobes Safeway where the shooting took place.

EM: The line was headed towards the entrance of the Safeway where Gabrielle Giffords was with her staff.

MR: You had a clipboard because you were still doing college applications.

EM: I was doing college applications and we get into line and there were probably 15 people in front of us. And then I heard popping noises, and I realized there was a shooter going down the line shooting people in the head.

MR: I tasted gunpowder and I covered you by slamming you against the wall.

EM: Yeah. I don’t really remember much after that, I think I crouched down.

MR: He tried to shoot your head through me.

MR: But he shot me on my left arm. So I just turned around and I thought, Little man, you better be looking me in the eye if you’re going to shoot me again. And what was astonishing is that he had no facial expression. It was like he was asleep, he had nothing. And then he dropped the gun from my head and shot me in the back. And I heard the glock magazine clatter to the ground. And then, astonishingly, one man ran past me and one man almost jumped over me, and tackled this young man.

EM: The shooter was being held down. I was fully in shock and I hadn’t fully comprehended what had happened–I didn’t understand that so many people had been shot. I remember seeing a lot of blood and people from the butcher shop came out with all of their butchers cloths and I remember getting some of those for you to hold against your back. They were very worried that you were going to be paralyzed.

MR: Are people surprised that you survived this thing?

EM: People don’t really talk to me about it.

MR: You kept saying you felt everybody treated you like a glass doll.

EM: People were acting like they couldn’t joke with me, they couldn’t say anything, like I was so breakable. But I felt like that was the time that I was the strongest was right after the shooting. I was organizing who was gonna bring us dinner on what day. And I was figuring out what to do with all the journalists standing outside of our house, badgering us. I think that was the first time that I felt like a grownup. That’s a hard situation to be in.

MR: Yeah. I’m so glad we made it through.