Dr. Couney pioneered the use of incubators to keep premature infants alive in the late 1800s. But the medical establishment initially rejected the practice. So, each summer for 40 years, Dr. Couney funded his work by setting up an exhibition of the babies and charging the public admission.

Parents didn’t have to pay for the medical care, and many children survived who would have never had a chance otherwise.

Ninety-five-year-old Lucille Horn was one of them. Here, she tells her daughter, Barbara, about spending the summer of 1920 in an incubator on Coney Island. 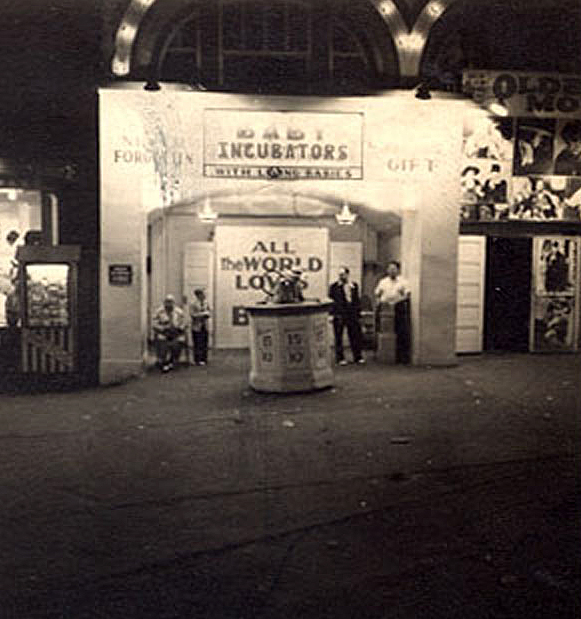 Photo of the outside of the exhibition courtesy of Beth Allen.

LH: My father said I was so tiny, he could hold me in his hand. I think I was only about two pounds, and I couldn’t live on my own. I was too weak to survive.

BH: So the hospital didn’t have anything to offer?

LH: No, they didn’t have any help for me at all. It was just—you die because you didn’t belong in the world. So when I was born, my father was looking for a blanket or a towel to wrap me up in, and somebody said, ”Where are you going?” And he said, ”I’m taking her to the incubator in Coney Island.” The doctor said, ”There’s not a chance in hell that she’ll live.” He said, ”But she’s alive now.” He hailed a taxicab and took me to Doctor Couney’s exhibit. And that’s where I stayed for about six months.

BH: Do you know how your parents knew about the incubators?

LH: They saw the exhibit on their honeymoon. You had to pay to go in, and then the babies would be all lined up.

BH: How do you feel knowing that people paid to see you?

LH: It’s strange, but as long as they saw me and I was alive, it was alright. [Laughter] I think it was definitely more of a freak show. Something that they ordinarily did not see. But I remember going when I was older to see the babies.

LH: Yes, he happened to be there at the time I went in. And I went over and I introduced myself to him. And there was a man standing in front of one of the incubators looking at his baby, and Doctor Couney went over to him and he tapped him on the shoulder, and he said, ”Look at this young lady. She’s one of our babies. And that’s how your baby’s gonna grow up.” I remember he gave me a hug before I left. You know, there weren’t many doctors then that would have done anything for me. Ninety-four years later, here I am. All in one piece. And I’m thankful to be here.