Everyone has heard of Charles A. Lindbergh, the first man to fly the Atlantic. But does the name Charles A. Levine ring a bell? Likely not. Yet seventy-five summers ago the two men were locked in a battle for aviation history — one as a pilot, the other as a promoter.

Levine, a 30-year-old millionaire who had made his money buying and selling World War One surplus materiel, had entered the competition for a $25,000 prize for the first person to complete a nonstop flight from New York to Paris. Lindbergh beat him to it on May 20, 1927, but the following day the young entrepreneur announced that his privately owned airplane would presently fly farther faster — and with a “mystery passenger” aboard. The pilot, he stated, would be one Clarence Chamberlin. The mystery passenger remained a mystery.

On June 4, 1927, thousands gathered at Roosevelt Field on Long Island, New York, to witness the takeoff. While they waited, Charles A. Levine climbed into the back of his plane and had Chamberlin taxi him around the airfield. No one thought much of it until the plane was halfway down the runway and gaining speed.

Suddenly it was clear: The mystery passenger was none other than Levine himself. The millionaire’s wife fainted. His children wept. The press had a field day.

Forty-two hours later, Levine and Chamberlin ran out of gas and landed safely in a peasant’s wheat field in central Germany. Despite being 40 miles short of the intended destination of Berlin, Chamberlin had smashed Lindbergh’s distance and speed record. And Levine had become the world’s first transatlantic air passenger — as well as an international hero whose face was plastered across newspapers from Europe to America.

The euphoria was greatest among American Jews, for whom Levine was a new symbol of Jewish courage and fortitude. Yiddish radio stations and newspapers covered and re-covered the story and Jewish musicians wrote songs about him.

It seemed Levine had made history. 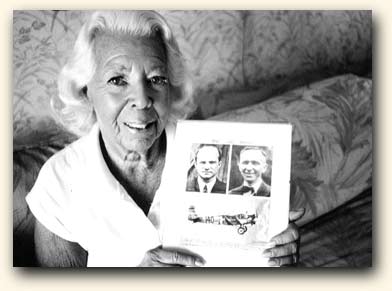 Ardith Polley is the daughter of Charles A. Levine and the co-narrator of the Yiddish Radio Project documentary about his life. 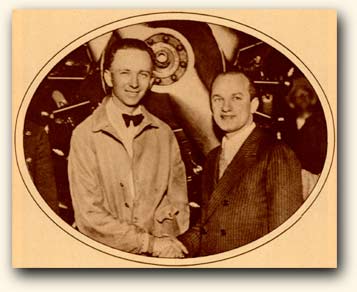 Charles A. Levine (right) and his pilot Clarence Chamberlin (left) pose for a picture a few days before their historic flight across the Atlantic. 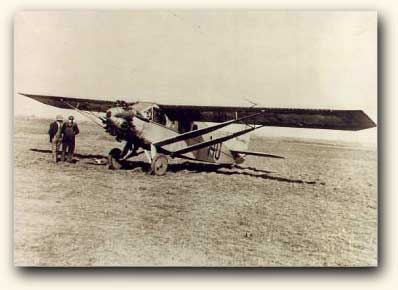 The Columbia prior to its transatlantic flight. 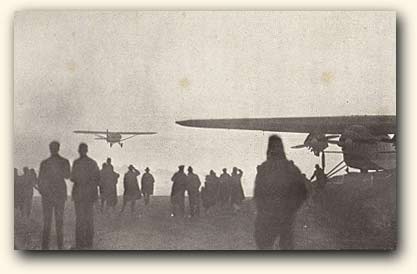 A crowd gathered at Roosevelt Field to witness the historic flight. 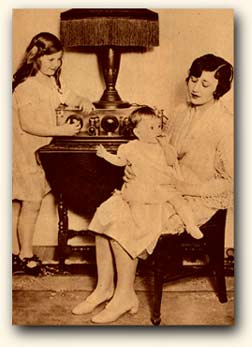 Levine’s wife and children tune in to the radio for the latest news on Levine’s flight. The toddler is Ardith. 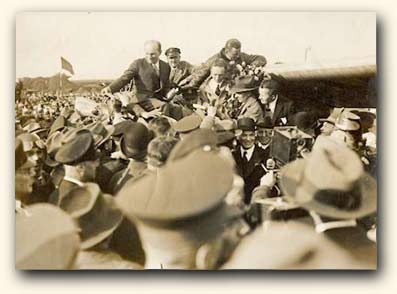 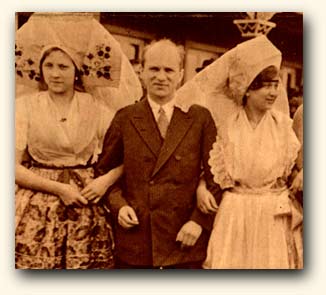 When Mrs. Levine saw this published photo of her husband amidst two young Frauleins, she immediately packed her bags for Europe. 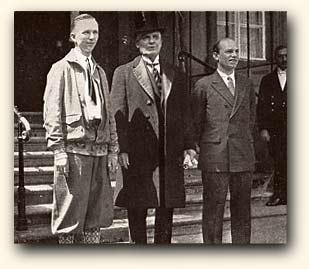 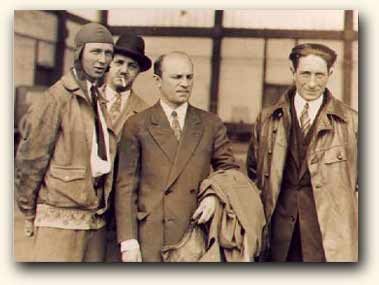 Levine (center), with Chamberlin (left) and Maurice Drouhin (right). Later in the summer of 1927, Levine hired Drouhin to fly him back from Europe to the US. When the flight was cancelled, Levine flew solo from France to London to avoid paying Drouhin his $4,000 forfeit fee. 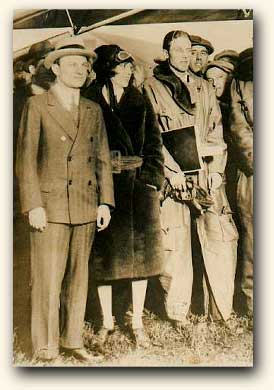 Levine stands with his mistress Mabel Bolls, aka “The Queen of Diamonds.” Levine’s public affair caused his wife to seek a divorce. “After that,” recalls Levine’s daughter, “he was like Napoleon without his Josephine.”

In the weeks following Levine’s triumph, the Jewish-American community was in a state of rapture as across the sea one of its own was received by European dignitaries from Hindenburg to Mussolini. On Manhattan’s Lower East Side, the Jews spoke of little else.

“The anti-Semites in Germany and the anti-Semites around the world will have to take their hats off to Levine the Jew,” pronounced the New York Yiddish daily newspaper Der Tog. “No longer will we be obliged to prove that Jews are as capable and strong on the field of physical bravery as on the field of intellectual achievements.”

Within a month a half-dozen songs had been written in Levine’s honor. The transatlantic flyer was seen as heralding the advent of the modern Jewish hero: independent, courageous, and proud. Two of the songs made musical allusion to “Ha’Tikvah” (The Hope), the then unofficial Jewish national anthem. The implication was unmistakable: here was a defining character for Jewish aspiration.

A Hero Is Forgotten

On February 28, 1937, a short article titled “Headliner Fades Out” ran in the back pages of the Los Angeles Times. A sort of living obituary, the piece chronicled the precipitous fall of an ephemeral modern legend.

Since the summer of 1927, everything Charles A. Levine had touched ended in ruin. In 10 years he had lost everything: fortune, family, and fame — the latter returning momentarily in 1934, when, the LA Times article reports, he was “found unconscious in the kitchen of a friend’s home, with five gas jets on.” In the eyes of the writer summarizing his life, Levine had sunk plenty low. In fact, he had a ways to go.

A few months following the article’s appearance, the erstwhile headliner was back in the news, this time in connection with a Federal charge of tungsten smuggling. After spending 18 months in jail, Levine was eventually busted again, this time for the smuggling of an illegal alien. (The “alien” was a German Jew denied an American visa in his attempt to escape Hitler.)

The former hero’s indignities were for a time thought amusing enough for newspaper back pages, but eventually even the tabloids lost interest. By the 1950s only the FBI cared to investigate further.

Hunted by the FBI

Fifteen years after his tungsten smuggling conviction, Levine still owed the lion’s share of his $5,000 fine. In 1952 the Justice Department sought to ascertain whether the cash was recoupable.

The Federal Bureau of Investigation operative assigned to the case picked up Levine’s scent in the shadowy world of New York rooming houses and dubious businesses. But laying hands on the former flier proved far more difficult. Levine had become a ghost, resurfacing sporadically among acquaintances to make a pitch or borrow a few bucks and then disappearing for days, weeks, or years at a time.

No one, not even Levine’s daughter, knew where he lived or how he survived. Those who saw him remarked on the shabbiness of his suit and his evident lack of money. There was hardly a soul to whom he didn’t owe money. According to his notes, the FBI agent had trouble believing that Levine “was at one time a prominent newsworthy individual.”

After evading the FBI for 26 months Levine was finally discovered in April 1956, thanks to a tip from a former business associate seeking revenge for an unpaid loan. But the task of catching Levine was still easier than getting him to cough up, and in 1958 the FBI closed the case without recovering a penny.

Although the FBI ultimately failed in its mission, the paper trail it left behind illuminates an otherwise obscure chapter in Levine’s drawn out fall.

Having finally hit rock bottom, Charles A. Levine stayed there for the remaining days of his life. He breathed his last on Dec. 6, 1991, cared for by an older woman who had picked him up off the street some 30 years earlier, having vaguely remembered his name from headlines of yore. 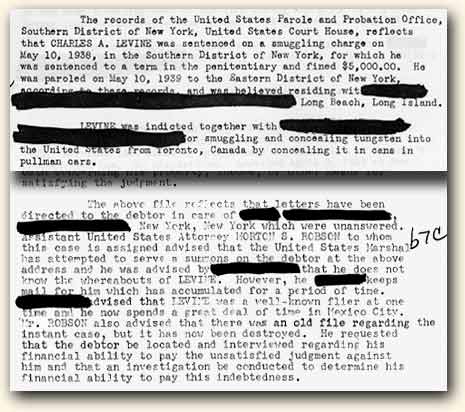 In 1953, Levine becomes the focus of an FBI investigation. Levine had avoided paying the fine from his 1937 smuggling conviction, and now the Feds want to collect. Levine’s case is reopened and an agent is assigned to tracking down the evasive former flyer. 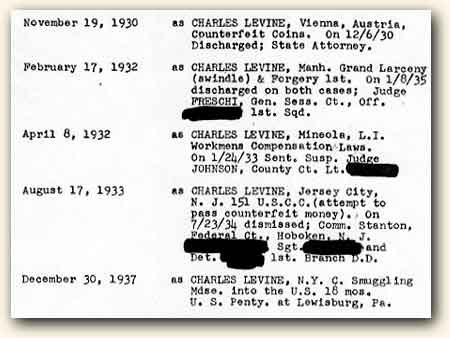 In the course of his investigation, the agent discovers Levine’s rap sheet. 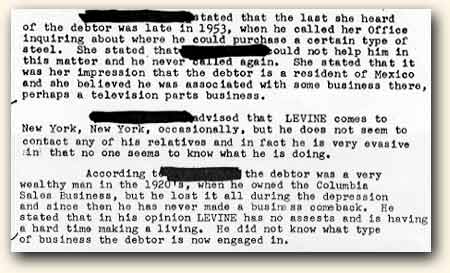 The agent questions several of Levine’s former acquaintances. He learns that Levine has hit on hard times but finds few clues to Levine’s whereabouts. 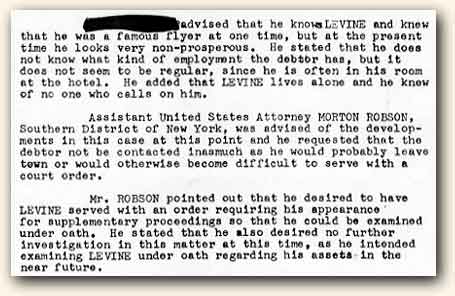 A clerk at a seedy New York City hotel confirms that Levine is living there. The agent is instructed by his superiors not to contact Levine, for fear that Levine may leave town if apprised of the investigation.

Sure enough, when Levine learns that the FBI is pursuing him, he leaves the hotel. He apparently spends the next year moving among several rooming houses. He is occasionally seen at a salesmen’s office in New York City, where he collects his mail.

The FBI agent is put in touch with Levine’s brother. The brother says that he, too, is owed money by Levine, who has been avoiding him for some time. 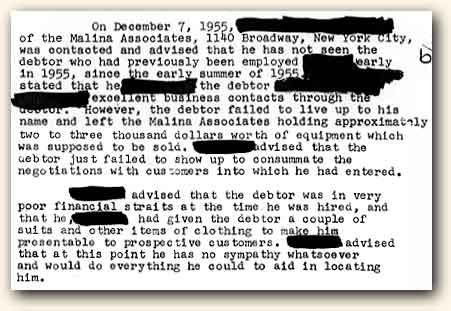 A recent employer of Levine agrees to assist in the investigation, having been stiffed by Levine for thousands of dollars worth of company equipment. 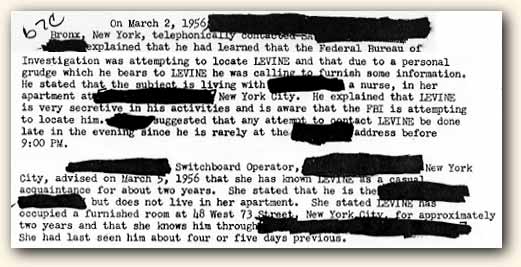 Acting on a tip from a former associate, the agent finally locates Levine in 1956 and calls him in for questioning.

When called in by FBI officials for a second round of questioning, Levine refers to the Statute of Limitations on the collection of his fine. 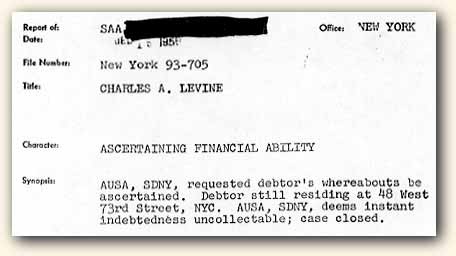 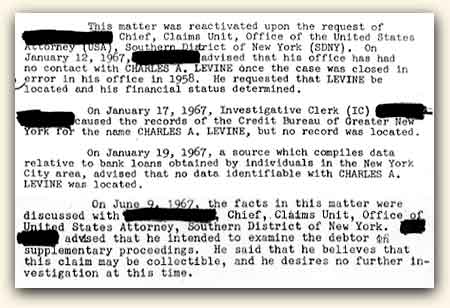 …only to re-open it nine years later, stating that the case had been closed “in error.” The last record of the case is dated June, 1967. Though Levine again pleads protection under the Statute of Limitations, Federal authorities continue to believe that the claim “may be collectible.” 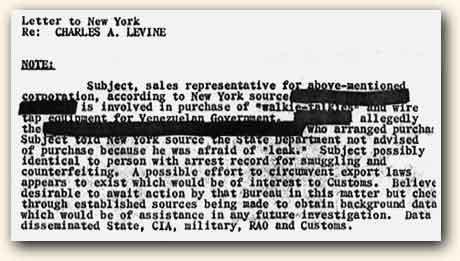 In the meantime, Levine has come to the attention of the FBI in an unrelated matter. Files dating from 1962 allege that Levine has been involved in the illegal sale of electronic equipment to the Government of Venezuela. The investigation is closed the following year due to a heavy caseload in the New York Customs Department.