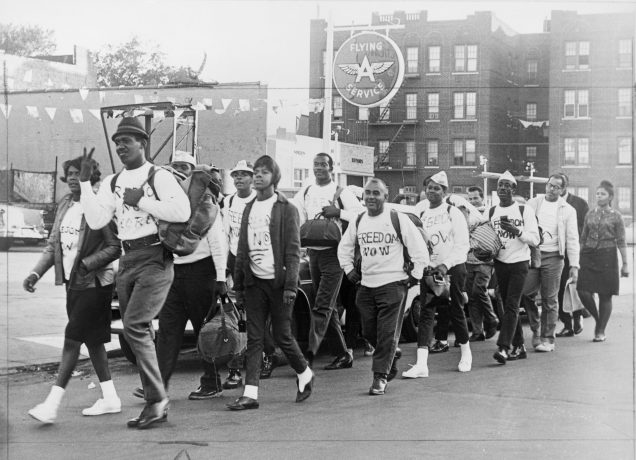 In late August 1963, the March on Washington led hundreds of thousands of Americans to the Lincoln Memorial, where Dr. Martin Luther King, Jr. gave his famous, “I Have a Dream” speech.

At StoryCorps, Lawrence, 66, tells his son Simeon, 39, about the difficulty of convincing his parents to let him go, and what it was like to be present on the podium behind Dr. King as he spoke.

Above: Members of CORE en route to the March on Washington, April 15, 1963. Lawrence Cumberbatch can be seen fourth from left in back wearing a white hat. Photo courtesy of Orlando Fernandez/World Telegram & Sun/Library of Congress.

LC: There’s always someone in most families that everybody looks to as the authority. And in my case it was my mother’s brother, Lloyd. So they did the usual, ”Go and see Uncle Lloyd. He wants to talk to you.” [Laughs]

They were so sure He’ll fix this. And I discussed it with him, and he says, ”You know, you’ve thought this out, this makes sense.” So, he told my parents. He says, ”I think the boy is okay, so he’ll be safe.” [Laughs]

And that was it. They followed his advice. We basically walked every day from sunup to sunset.

Archival Audio: (Singing from people participating in the March on Washington) Our diet was eating out of the Coke machines in the gas stations–cheese crackers with peanut butter for the whole 13 days, that’s all we ate. We walked on U.S. 1 because the Turnpike Authorities wouldn’t allow us. And the state of Delaware– they would not let us stop for any purpose. And we had to walk, and they literally put a patrol car behind us and one in front, and they marched us 30 miles until we were out of their jurisdiction. When we got to Washington, we marched into the demonstration on the mall. Archival Audio: (Cheering) And were led to the platform. And we were right behind King. It was overwhelming.

Archival Audio: I have the pleasure to present to you Dr. Martin Luther King J-R. (Cheering) I am happy to join with you today… People said, ”Well, what did you think about the speech?” I says, ”Nobody who was on that podium was thinking about the speech.” It was just so mind-blowing to look at this sea of people. You’ll never see this again.

SC: This was definitely a defining moment.

SC: I remember when I saw clips of Martin Luther King’s speech at Washington, and my mother said, ”Your father’s right behind him.” It’s a proud history, and you … you’re a hero of mine.

LC: Thank you Sim. I am very proud of that.