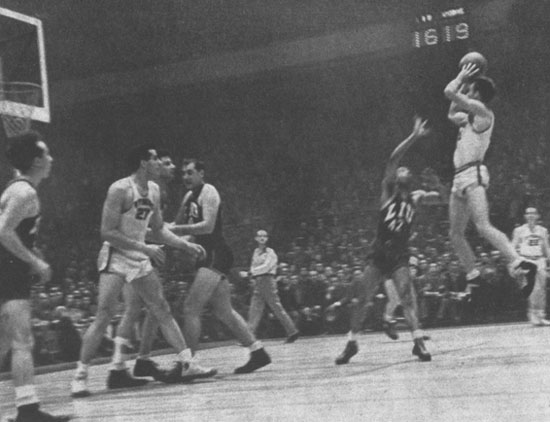 KS: I started out learning about the game of basketball on that old farm down in Hillsdale with my brother who was incidentally an outstanding ball player, probably the most outstanding one Hillsdale had had up until that time. He wanted me to play too, and of course I was just a punk kid and so he put a basket, a hoop, it didn’t have any net on it. And ah, he worked out against me sometimes, even though he was five years older and of course, the good lord must have put it in my mind, if I’m going to get up over this big bum so I can shoot, I’m going to have to jump. It probably wasn’t very pretty, but I got the shot off. And it went in. And ah, Bud says, ”boy you better develop that, that’s going to be a good shot”. So I started working on it.

The NBA started up in 1946, and I signed up with Cleveland, and in that day, nobody jumps you see, everybody had to keep both feet on the floor or the coach would take you out of the ball game. And I was out there scrimmaging or playing around before the season started and of course, my first coach was old ’Dutch” Dehnert’, an old time ball player. And old Dutch is on the side, I saw him sitting over there watching us. And when we got all done, he said, ’Sailors, where’d you get that leaping one hander?’, and I said, ’well Dutch, I don’t know, I’ve been shooting that for a long time’, and he said, ’you’ll never go in this league with that shot’. Well I thought my career was over with right now. That’s kind of how it all came about.

I’ll get several letters a week as a rule and they’ll ask me questions like, ’Did you really start the jump shot?’, what am I going to say? I usually want to write back, I say, ’Well Ray Myer from DePaul…’, who coached there for many years, he said it the best I think, he said, ’Sailors might not have been the first player to jump in the air and shoot the ball, but he developed the shot that is being used today’, that’s way he put it and I like that.