John Washington was born blind and with a severe loss of hearing that has become more extreme over time. Just before he turned 30, he met his future wife, Fannie Ruth, who was also blind and deaf. In 1950 they got married, and remained together for 55 years having three children together—Melva, Warren, and Canady—before Fannie Ruth passed away in 2005. 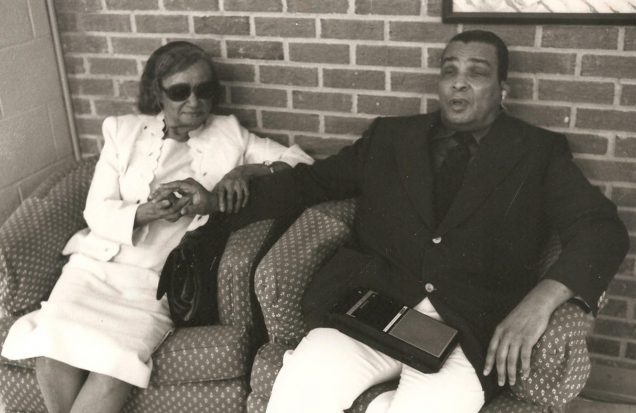 John, who did not finish high school, began reading books in braille “to learn the ways of life,” and went on to teach others to read braille as well. He spent years working as a massage therapist, and in 1952, in what he considers one of his proudest achievements, he helped found the first braille magazine in the United States focused solely on issues important to the African American community—The Negro Braille Magazine.

Now 95 years old, John recently recorded a StoryCorps interview with his eldest child, Melva Washington Toomer (pictured in the player above), using a TeleBraille machine, a device that requires Melva to type her questions on a keyboard which are then translated to a braille touchpad for her father to read.

At StoryCorps, he shared some of his favorite stories about raising his children, and asked his daughter an important question about what she plans to do with him as he continues to move closer to being 100 years old.

Besides using a TeleBraille machine, John also speaks with others through fingerspelling–a method of communication where words are spelled out directly into his hand by another person using the American Sign Language alphabet. (Watch the above video to see John and Melva fingerspell.)

Above: John and Fannie Ruth Washington at the Durham, North Carolina, YMCA in the mid-1970s where were he worked as a massage therapist. Photo courtesy of Melva Washington Toomer.

JW: You were my first child, I was so glad you were born. I cannot express the way I feel when I held your sweet little body. I kissed you, I loved you. Oh Melva, I was so proud when I started taking you out with me. You’d take me by the hand, and lead me where you wanted to go.

MWT: (Typing) Do you have any favorite stories about raising us?

(Laughs) One night I did catch you trying to sneak out.

MWT: (Laughs) We knew our parents couldn’t see, and we used to slip out at night, so Daddy started sleeping in front of the door.

JW: (Laughs) One story is, I was getting ready to give Warren a bath, but, as I picked him up to put him in the tub, he said, “Daddy, I’ve got my shoes on.” (Laughs)

MWT: (Typing) What were some of your proudest moments?

JW: What are my proudest moments?

Well, I did not graduate from high school. So I began to read books in braille to learn the ways of life. And then I taught people to read braille. So if I could help some person, then my living will not be in vain.

MWT: (Typing) Do you have any questions for me?

JW: Do you have questions…?

MWT: I am going to take care of you the best I can.

MWT: Daddy, I thank you for the interview.