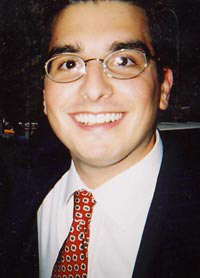 JL: My name is John Leninung.

EL: I’m Elaine Leinung, I’m his wife. We’re here at Grand Central Terminal to talk about our son, Paul James Battaglia who was killed on 9/11.

JL: His sister idolized him. Kristen when she was a baby, she always used to save food for Paul.

EL: Anything she’d save for Paul.

JL: Whatever she got, she’d save a piece, something for Paul.

EL: And her first words were not even mommy and daddy, they were “Brabu”…and you couldn’t yell at Paul. It was, “My Paul. Leave my Paul alone.”

JL: She would try and scold them. She would come to his defense. (laughing)

EL: When the first plane hit I thought maybe it was a commuter plane. And then I thought, ”Oh great, it’s hit right smack where Paul’s office is I hope to God he’s not at his desk.” I knew if anything happened, the first thing Paul would do was call my dad. He was the first-born grandson – very very close with my father. They would go shopping together. They would go get haircuts together. And I just knew that he would call my dad and then me. And I called my dad and asked if he’d heard from Paul and he said no. And then I said, ”Well, turn on the TV.” And uh…my dad said, ”Elaine, we lost him. That’s right where his office is where the plane hit.” And I called John and I said, ”I don’t know what we’ll do. But it looks like he’s gone.”

EL: No he had gotten there early because he had a meeting. And he had left whistling that morning. He was very happy, he was going to his meeting, he was going to work. In fact I was going to ask him to wait for me to ride the train with him because I loved to sit next to him on the train and I loved to smell his aftershave. We had such a happy night the night before, September 10, 2001. We were joking and laughing and I actually was so happy when I went to sleep that night. That’s the thing that got me afterwards. I had no premonition. You think that you should know something horrible is going to happen to your child that day….and I was so happy that night thinking that I had such a nice family and such a good life and I was truly blessed. And then 12 hours later it was very different. And I’ll miss him until I die.