Pedro Lopez was in 7th grade when a rumor began to spread through his school one morning in 2008. Immigration and Customs Enforcement agents were raiding Agriprocessors, the meatpacking plant in his small hometown of Postville, Iowa. Soon, Pedro would learn his mother was among the nearly 400 workers detained.

At the time, Postville was the largest single-site raid in U.S. history. For Pedro, it was the first time he had to reckon with what it meant for him and his family to be undocumented. 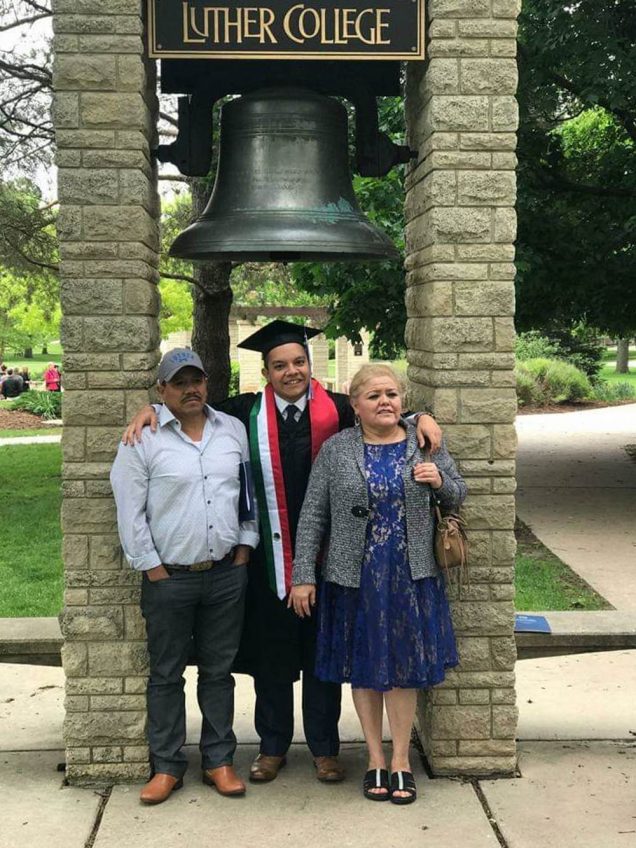 Top photo: Pedro Lopez (left) stands beside his mother, Consuelo Lopez (right) in May of 2011 at St. Bridget Catholic Church on the 10th anniversary of the Postville raid. Consuelo is carrying the Book of Names — a record of those arrested and detained. Photo by Jim Slosiarek of The Gazette, Cedar Rapids, IA.

Middle photo: Pedro Lopez stands beside his parents at Luther College in Decorah, Iowa on his graduation day in May of 2017. Photo courtesy of Pedro Lopez.

PL: The day of the raid, we noticed that there was a helicopter kind of flying around, that didn’t belong in the rural country sky. I wasn’t too worried about it, but when I moved into reading class, Mrs. Olafsen told us that it was something to do with Agriprocessors, and immediately after that I realized that my mom was working.

It was just shattering. When I said goodbye to her that morning, I didn’t realize I was gonna say goodbye for a year.

Afterwards I remember that we’d stay home from school and hid in in our basement, because there were stories of agents coming to the house and arresting the second parent or whoever answered the door, and we decided that the best thing to do was just close our home and, and not let you know, anything in.

There was no access to my mom at all for awhile. And I knew that I didn’t want to see her in, in jail.

My father had to quit his job at the slaughtering house, so we went from having a steady life to one that we wouldn’t know what was gonna happen the next hour. I remember having to go and ask one of our neighbors if we could have water from their house because we didn’t have enough money to pay the water bill.

For me, Postville, Iowa was our little slice of home, but then I realize, is it my home? Where is home?

Uh…all through this my father told us that things were gonna be alright, that we were gonna work through it.

We started to apply for visas and we got word that my mom was granted one, and that she was gonna be coming home. During that time, and even more now, I, I’m always skeptical about anything…but, I remember that I was in bed and I could hear, you know, people were coming in from the front door. And I heard my father just break down a little bit, and the muffled cry from him as he hugged my mom. And I came out of my room, going into the kitchen, and that’s when I saw her and I was like…yeah…that’s my mom.

That sad episode in our lives is behind us…but, it’s, it’s never gone.