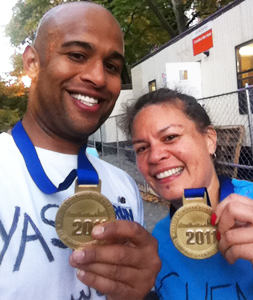 GM: I always have a notecard in my pocket that tells me what the date is. And I have to write down when I eat meals because sometimes I might eat lunch three times because I don’t remember that I ate already. The doctors say the brain can continue healing up to two years, but whatever is not back by that point is not likely to ever come back.

GM: Right, and so I’m going to have to live the rest of my life this way.  And the thing that scares me the most is, like, the thought that I will wake up one day, and I’ll be 80 years old and I won’t remember the last 40 years of my life.

YS: Do you remember when you first came out of surgery?

GM: I know that I used to always think that I was in San Francisco.

YS: What are those things called, do you remember?

GM: Yeah, do you remember another confabulation that I used to have?

YS: You used to think that your co-worker, Barbara, was your mom.

YS: Even though she’s a completely different race than you.

YS: There was one point where you were confused ’cause you thought we had broken up, and I would ask you, like, ”Why do you think you’re staying at my place?”  She’s like, ”Well, we’re just cool like that.”

GM: [Laughs] Yeah, Sorry about that.

GM: And after all you’d been doing for me.

YS: Thankfully you got over that.

GM: I’m thankful for that as well.

YS: So, is there any positive things that have come out of losing your memory that you can look back on?

GM: Well, I ran the New York City Marathon with you, my boyfriend. And um, one of the things that I asked you was to help me–as a trick–to not let me look at any of the mile markers along the way. And if I asked you how long we’d been running to always tell me 10 or 15 minutes [laughs].

And it really worked like a charm. And when we got to the end, you and I were running across the finish line, and as if on cue I started crying my eyes out because I was so happy. You know, I have spent a lot of days since my injury comparing myself to what I used to be and, and feeling sad about the things that I’ve lost, but doing the marathon really shows me that I still have a lot left in me.